Well...the velcro collars are officially a bust. Flynn is the only one who hasn't managed to get his off at one point or another. Mom tried making them shorter thinking that would help, but no such luck. If anyone has suggestions, we are all for it. Standard kittens collars just don't get small enough for kittens this size. Someone suggested they may be using the curtains to get them off - which is a possibility. Who really knows other than the dumb things won't stay on.
**Collar report: everyone has their collar off except Flynn. Miss Connie sent mom a link for a company that makes collars that get to 4" so let's hope those work. Report next week. 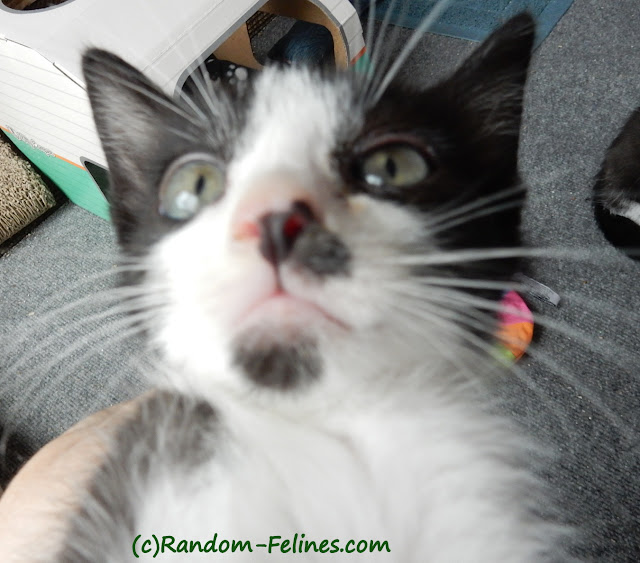 Flynn and his goatee

That said, mom weighed them the other day and except for Harlow, everyone is over 2 pounds. However, they can't have surgery until their colds are cleared up so it could be another week or two. And Harlow and Romero has NASTY eye issues at the moment so that really has to clear up. We will spare you pictures...it is the inner eyelid that is swollen and they are on meds, but blech.

Chanel has come out of her shell as well. Not sure if it has to do with her siblings being gone or being the "big sister" to the rat pack or what, but she regularly comes up and asks for attention and love (or she is begging to be rescued from the torment of living with 6 smaller kittens). It is pretty adorable. She seems to be at the tail end of her cold, so when that clears up she will go back up to the adoption center. 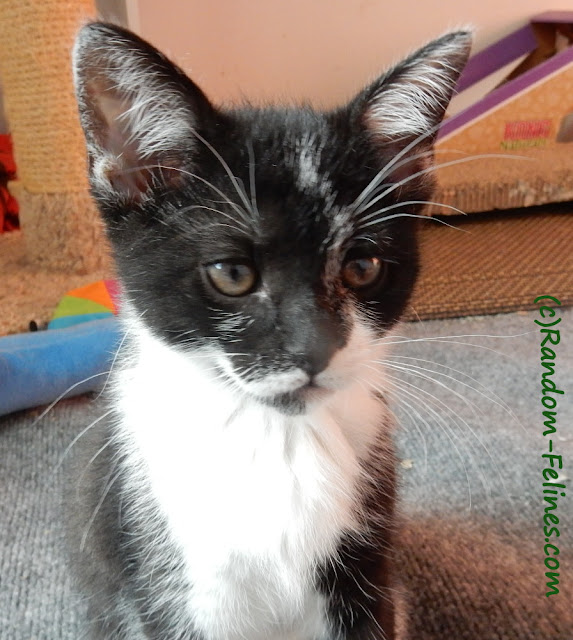 Romero gave mom a scare Tuesday night. He let out this HOWL. She looked through the door and he was standing by the food dish and looked ok but then let out another HOWL. She rushed in and picked him up to check him over and he freaked out. Mom was scratched several times as she tried to get a look at him (she says thank heaven she trimmed nails earlier in the day or it really would have been ugly). He fought her and she put him down to avoid stressing him out more. He climbed into the bottom shelf of the cabinet and howled or smacked any sibling that came near him. Of course, it was 8pm on a holiday, so mom scrambled to try to figure it out. Nothing obvious and no blood. He is one of the kittens with eye issues but he was acting like it was the opposite side of his head. Mom finally broke down and sent a text to the rescue and also dosed him with a tiny bit of pain killer that she has in her stock of supplies. Obviously short of running him to the emergency vet (and rack up a huge bill), there wasn't much to be done. They agreed mom would keep a close eye on him and if it got worse would run him to the ER vet. And as of Wednesday morning....he was acting fine. She may never know exactly what happened, but she wonders if he maybe bit down on a piece of food and it hurt or got stuck or something. She did try a couple more times to get a look at him, but after he bit her thumb, she decided to give him some space (those dang baby fangs are sharp). 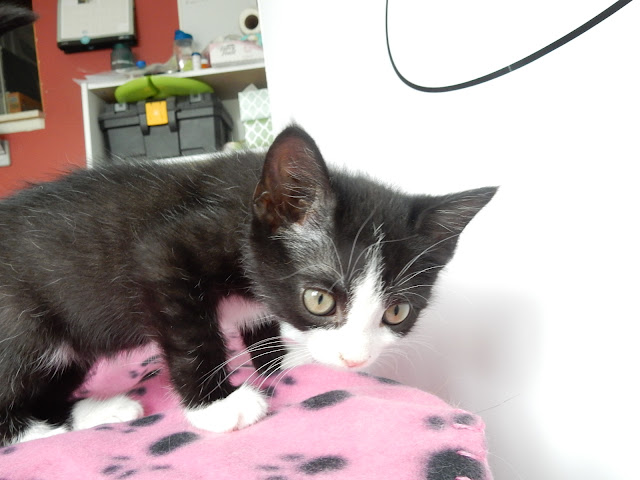 the biter (before his eye got infected)

We hope you all have a peaceful weekend with NO fireworks this time. Mom has an adoption event on Saturday with one of the rescue's partner stores and then a D-O-G transport on Sunday.
Posted by Random Felines at 6:30 AM