Panache and her kittens

Panache wasn't feeling all that well last week so mom broke down and took her to the v-e-t. Of course, then that morning she started sneezing, but mom figured she already had the appointment so whatever. Panache was very good though nervous. Tiny fever, got some fluids into her, and mom bought some a/d to feed her for a couple of days. She weighs: 6.2 pounds. She liked the a/d and is on meds for her cold. She must be feeling better as she is eating other things as well. The v-e-t did say that her teeth are TERRIBLE. Didn't even want to guess at an age for her. So, when she is spayed she will get a dental as well. 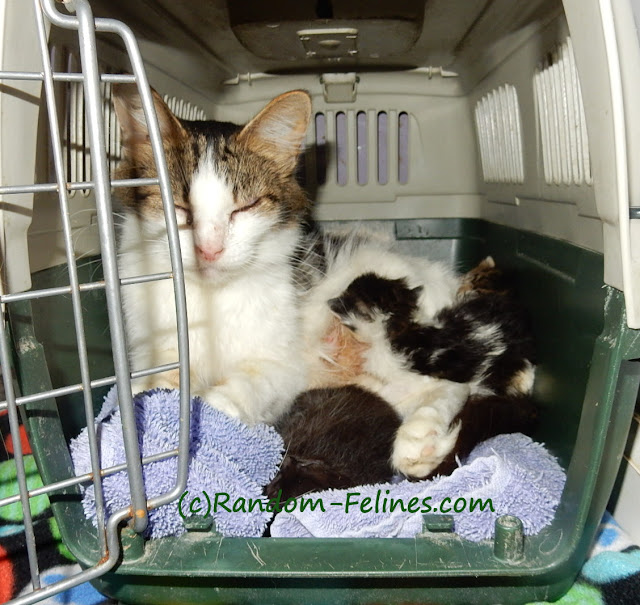 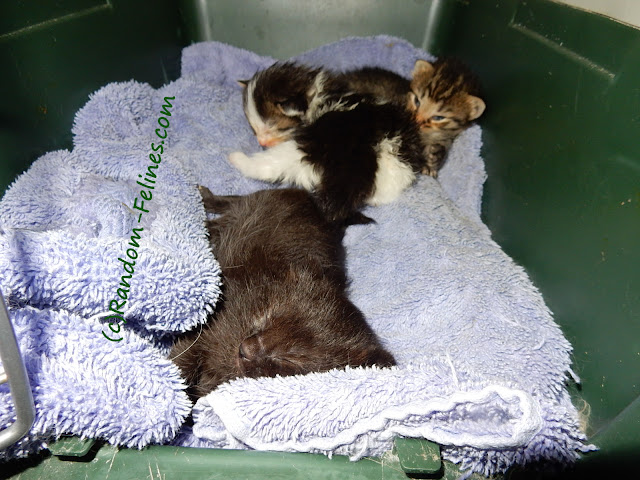 Panache wasn't comfortable in the box mom set up for her and kept moving around and sleeping in weird places. Finally on Saturday mom had a revelation and put the carrier in there for her. Moved the kittens in and Panache followed right behind them. Since then most times mom has checked on them, Panache has been in the carrier with the kittens. Mom did move her from the carrier you see here to one of ours so that she can just take the top off to check on the kittens.

As for names, Miss Connie from Tails from the Foster Kittens suggested: Foxy, Mallard and Fish (out of water) from the Chicken Little movie (which mom hasn't seen). Of course Foxy from the original text as well and that is what struck the inspiration. So the black one is Fish (and mom has taken to calling her Fishstick and making herself laugh) - she is the biggest kitten. The brown tabby is the other girl and she is Foxy. And our tiny boy who looks like his momma as a brown/white tabby (and may be long haired like her too - too soon to tell) is Mallard.

They all weigh over half a pound and will be 3 weeks old tomorrow. They are also getting more mobile....Fish and Foxy were both wandering toward the edge of the carrier this morning while mom was getting ready for work. We aren't entirely sure what Panache is going to do when the kittens realize they can escape.
Posted by Random Felines at 6:30 AM