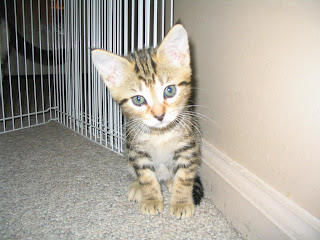 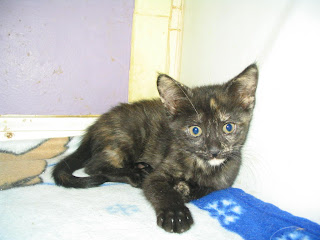 Here is the new crew. Since it is kitten season and I have a revolving door on the bathroom (OK, not really, but I should), I took a new group home the same day Chloe took up residence at the shelter. I was there all day anyhow and told our processing department to save me a trip. As Deb (our tech) said, she was giving me the rowdy bunch. Just my luck. :)
Actually, this is a nice group of kittens. Probably around 6 weeks old. I am not convinced they are all actually related though. I didn't get a picture of the boy - he is all black and yawned as I shot it (which I didn't realize until I uploaded the pics from my camera - gonna have to try again). I wasn't sure about names and then made the comment that they were a little nutty.
So, the gray tabby is female named Pistachio. Pecan is the female brown tabby. Hazel-nut is the tortie girl. And their brother is black and named Walnut (aka Wally). I had the gate in front of the bathroom door over the weekend and both tabby girls would puff up and hiss everytime one of my crew walked by - being ignored by everyone but Spud of course.
Posted by Random Felines at 2:47 PM 1 comment:

Chloe went back to the shelter on Saturday. You can see her on Petfinder: http://www.petfinder.com/petdetail/16703866 The photographer at the shelter thought her momma pic was pretty funny so that made in online at the shelter website and I posted it on Petfinder too (I update Petfinder for our shelter). No interest yet, but she is in a room surrounded by kittens, so that doesn't help.

Speaking of kittens, all of hers were adopted. I got an email from the family that adopted Requiem saying he is trouble of the fun kind and was currently killing a toy mouse I had sent him (all my fosters go home with a bag of treats and toys). I love getting updates and knowing my "kids" are being loved as much as I loved them while I had them in my house.
Posted by Random Felines at 2:43 PM No comments: 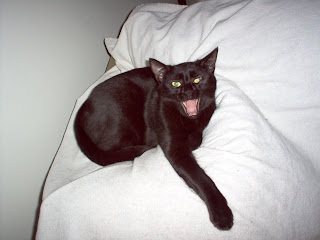 What is it with black cats and sunshine?? It has been in the mid to upper 80's here in Ohio for over a week. I know it is June, but I hate being hot. I stood in parent's garage talking to my Dad last night and got sweaty doing nothing.
Anyhow, despite the layout of my condo, there is regularly a patch of sun by the sliding door by mid-afternoon. Saturday, Mozart spent a lot of time over. At one point I leaned back over my chair to check on him and he cracked an eye at me. That must have been enough invitation, cause at that point he felt the need to come over and share the love. Now, I have the a/c on, but there is just something extra hot about the black and now very warm furry hot water bottle. Love the boy, but way to hot to be loved on by him at that point.... :)
Posted by Random Felines at 2:25 PM No comments:

Well, the kids went back to the shelter to be adopted this past weekend. Requiem, Minuet and Cadence stayed after their appointment. I took Treble and Nocturne home with me. They all made weight, but there was only one open cage. However, processing called Sunday morning to let me know another spot opened up, so I took the other two boys back Sunday morning. It is pretty quiet with no kittens in the house.

However, Chloe is the first momma cat I have had that still looks for her kittens. She was pretty good the first night. But Monday night I was passing Animal Planet on cable and stopped to watch. There was as tiny kitten that squeaked and Chloe's ear perked right up and she looked around. A few minutes later, the show came back to update on the cat and the kittens and Chloe got a little frantic looking for kittens. I wish I could explain to her that her kids are OK and she doesn't need to look for them.

Cadence has already been adopted. They were neutered and spayed yesterday, so he will go home today. Requiem has a hold and hopefully his new family will come in today for him. And I was told that a family had expressed some interest in Treble. YEAH!! I was concerned since there are so many kittens right now and these guys all look alike. I really think it makes a difference that I put up signs telling people about their personalities.
Posted by Random Felines at 2:26 PM No comments: 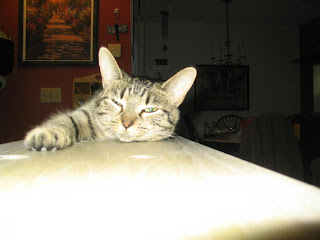 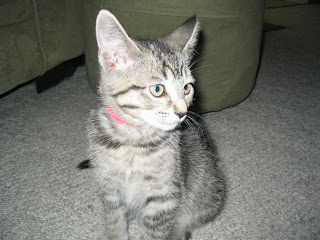 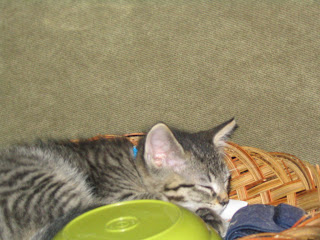 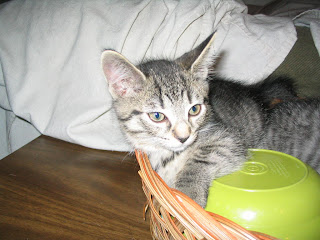 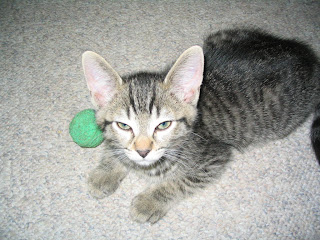 The kittens will be 10 weeks old 6/5/10. They have an appointment at the shelter and I suspect that they all might be big enough to stay. I was sure that Cadence and Requiem would be big enough, but I am not sure I am ready for everyone to go back. Chloe will stick around for a couple of weeks so she is dry to be spayed.


Posted by Random Felines at 10:26 AM No comments: