Third Monday in a row

Well, not for us, but it's been a long week for mom already. She been super busy with rescue stuff.

The Celtic kittens are on meds for a minor thing but will then get on the surgery schedule and be ready to go.

Ivy had a dental yesterday that didn't go like the plan. Ivy is fine....mom isn't really happy with the surgeon (not our regular vet).

Gordon continues to grow and is totally unfazed by the girls.

Morrigan was spayed on Friday and is back at the rescue. She was making it pretty clear she was done being a momma. So when a surgery spot opened up, she was put on the list. Cross your paws she gets adopted quickly.

Her kittens are doing well. They don't seem to notice that Morrigan is gone and in fact the tabby boys are getting even more friendly. Mom had planned to leave the door open with the air lock up but they are big enough to big over so they will be in the room.

Gordon continues to do well. Daiquiri stood up next to his cage the other day and growled at him. Mom had given him a spring toy and Daiq is sure all the springs belong to her. The tiny boy came over and just slapped at her - totalky unafraid. 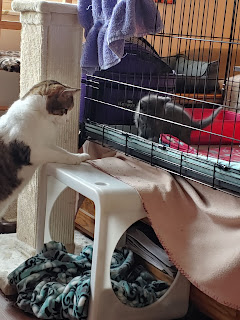 Mom also work a little more on the balcony. She needs another small bag of potting soil and a couple new chairs and it's ready to go. Now we just have to hope she doesn't kill all the flowers. 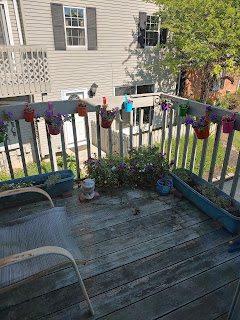 Morrigan is in heat. Save us all from the singing.

Gordon decided mom isn't so bad. She was cuddling him on Sunday and he purred!! His eyes are still runny but he is eating well and full of spunk. 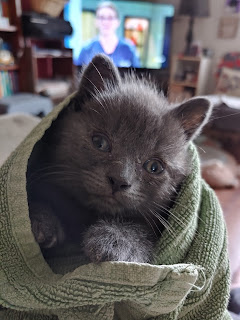 Mom was busy this weekend. She got plants for the balcony on Saturday and then spent a couple of hours on Sunday at the zoo. She got to see the cheetah run and they were posing for the camera. 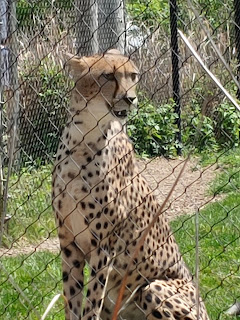 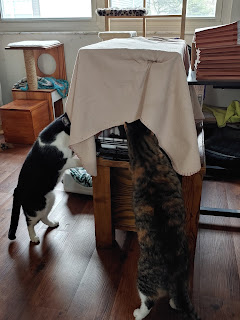 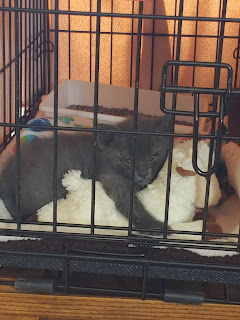 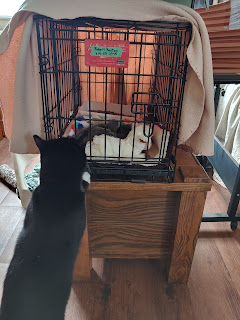 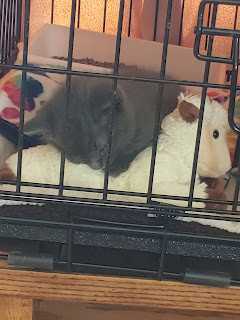 One of the rescue volunteers spent Monday chasing this little guy around a yard to keep him away from a big dog. No sign of a mom or siblings. They kept him overnight and dropped him off here yesterday morning.

He's too little to be tested and he seems to have a cold so he is on his own in the crate for a while. He is a little nervous but no doubt will come around in no time.

The woman who first saw him and contacted the neighbor made name suggestions: meet Gordon

So long as you are comfy

When Morrigan and the kittens first arrived, mom stacked some clean blankets on a shelf to use if needed. They were still there until the other day when one kitten climbed up and knocked the blankets to the floor. 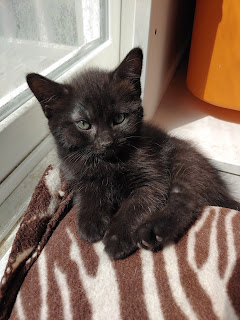 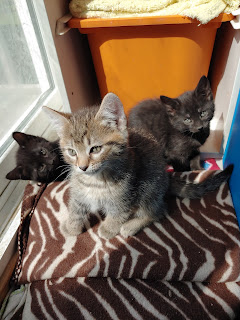 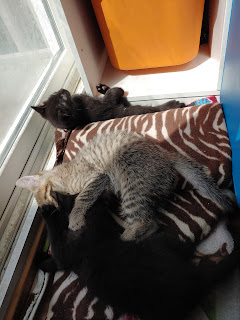 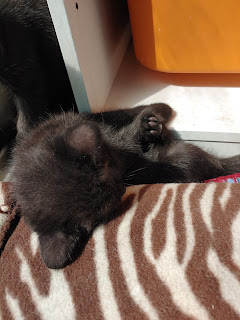 Posted by Random Felines at 6:30 AM 4 comments: 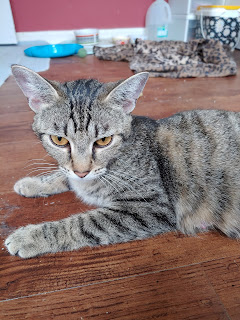 I've talked before about the set up of the foster room. Due to just general space restrictions in 980 square feet of condo, I converted the dining room I never use into my foster space. To close it off I bought 3 screen doors and screwed them together. It works pretty well....most of the time.

Wednesday night after my shift at the rescue, I came home and about an hour later heard growling near the door into the foster space. I looked over expecting to see one of my cats standing near the door. Oh no - Morrigan had managed to pull the door IN and got it open enough that she and all five kittens were standing in the airlock space created by the exercise pen. Everyone was herded back inside and I starting using the lock I put on the door when I was fostering Soda. 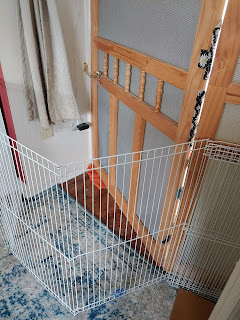 Morrigan decided to take the challenge and then started using the cubes to jump to the top of the doors. Seriously??? Fine - I moved the cubes to the other side of the room. That didn't stop her. Several times between 9pm and 11pm she jumped up. She came into the main house once but after that would jump back into the foster room with the kittens.

I did text the rescue asking if there was surgery space today thinking I could get her spayed and then up to the rescue for the weekend. No luck. There is an open spot on Tuesday. My plan Wednesday night in my frustration was to take her up to the rescue and she would have to stay there until Tuesday and then go to the adoption floor after being spayed.

Of course, if an effort to screw with me, she stopped jumping after a while last night and didn't do it on Thursday. She may still have to go back but for now she is good in the room (for those curious, my cats tend to be ok with foster cats, but I don't want to take the risks that either one of them or Morrigan will start something that results in someone getting hurt).

Email ThisBlogThis!Share to TwitterShare to FacebookShare to Pinterest
Labels: a post from the mom, celtic kittens, Morrigan 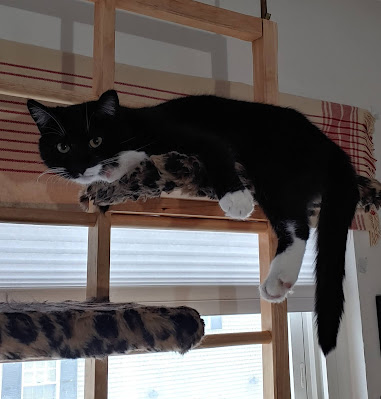 Posted by Random Felines at 9:57 AM 9 comments:

Not quite big enough 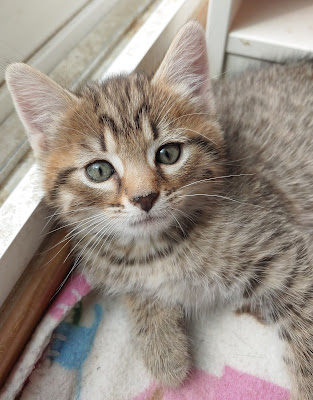 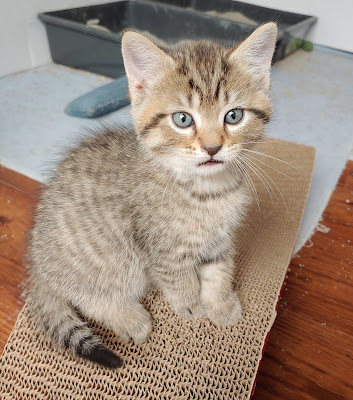 The girls are hard to identify as they are moving around. One of them does have a white locket 9n her chest so that helps....but you had to catch them to check. 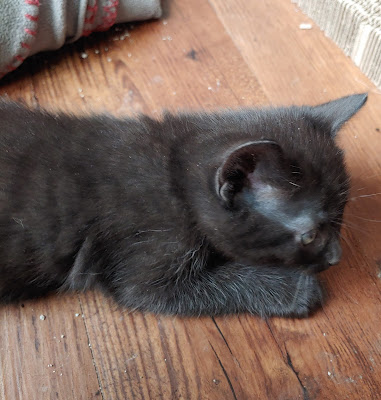 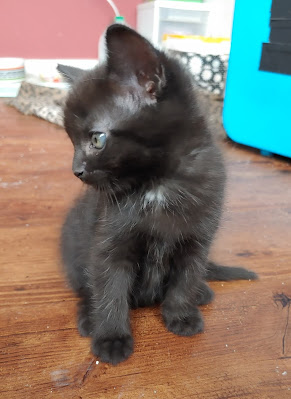 And then there is the boy with his tail light. 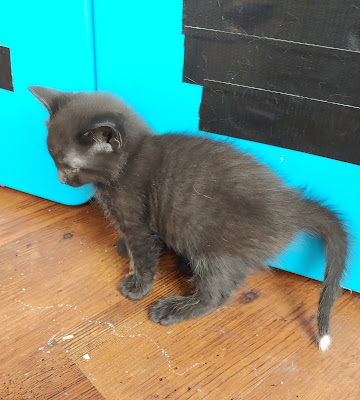 About the Kitty Kasa behind Taliesin - that is duct tape you see. The cubes all have a cut out cat face. A foster we follow on Instagram had one of her foster kittens get a leg stuck in the cutout. The kitten was fine but it made mom worry so she covered them up. They also has bern turned backwards but are now turned around so they can be used now that the kittens are bigger.

Posted by Random Felines at 6:21 AM 5 comments: