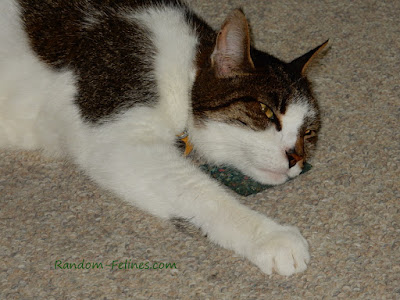 The brandy kittens were tested on Tuesday and are....NEGATIVE (in case you missed it on facebook). The plan for the weekend was to put Saldano and Wheat in a carrier, clean and move a couple of things in the foster space. Then....mom wanted to move Marilyn and all five kittens into the foster space with Wheat and Saldano.

However, mom decided that moving them Wednesday night was the better idea. She was going to be home to keep track of everyone...and honestly was getting tired of the bathroom being a disaster. The kittens are getting big enough that it is a whole different kind of adventure with them in there. 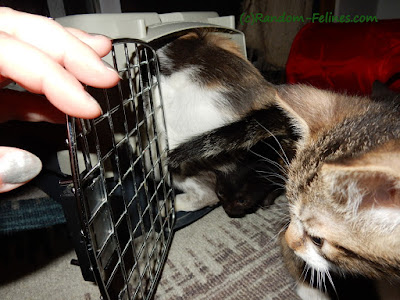 So Marilyn and the five kittens packed their bags and were hauled off to the foster kitten space. 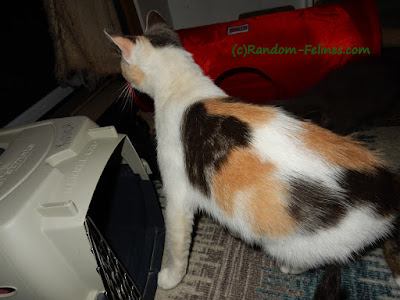 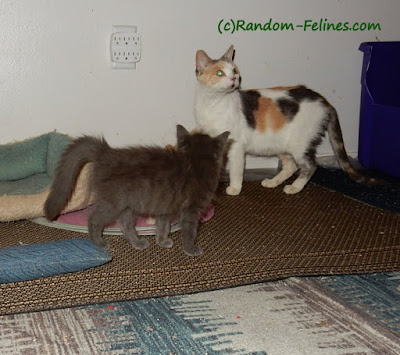 Saldano isn't too sure about that bigger lady cat 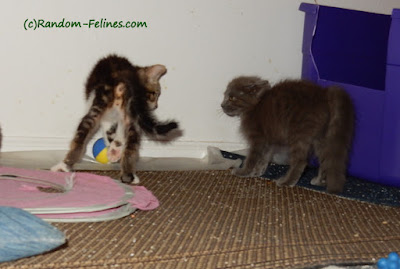 Saldano and Russell give each other the floof suit reaction 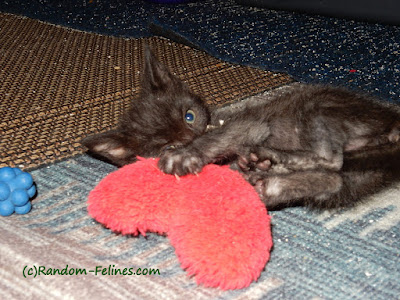 Calvados took it all in stride....then found a new toy 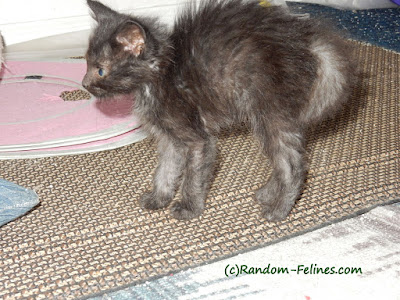 Kirsch and Chambord were pretty jumpy about the changes

All in all, it went pretty well. Wheat and Monroe were about as laid back as they could be. Marilyn checked out the place, found the food and made herself at home. The brandy girls were a little jumpy. Calvados and Russell wandered around and checked everything out, only getting jumpy when a certain gray girl would get in their faces.

Saldano was just RUDE about all of it. She growled, she hissed, she floofed out. However, there was no smacking or anything like that.

By the time mom went to bed that night, everyone had settled in.

Wheat is mostly fluff. She had some minor snot going on that is clearing up now, but we suspect she wasn't eating as much due to that. We are glad to see all the brandy kittens over a pound. They are still tiny for their age, but considering where we were with them 2 weeks ago, this is great progress.  And Saldano and Russell are well on their way to 2 pounds. Best mom can figure the brandy kittens and Russell and Monroe are 9 weeks old this week. The brandy girls are getting big enough that mom may be able to get collars on them to be able to tell them apart....hopefully.
Posted by Random Felines at 6:30 AM