Mom also ran into Tostada's new mom last weekend. Our girl is doing very well - apparently follows her new mom around the house chatting up a storm. It took her a while to find her forever home, but it sounds like she has hit the jackpot. Mom did ask about the name and she is going to be renamed Sweet Pea.
~~~~~~~~~~

Both of the French City ninjas were adopted last weekend (not together). Apparently the secret to quick black kitten adoptions is to make sure they are the tiniest ones available. MOL

Daiquiri has a new hobby. She waits until mom is asleep and starts shutting doors around the condo. The bedroom door is closed during the day and then left open while mom is sleeping. This is the primary door to close. Normally Daiq will close it part way but she has gotten it closed completely - and one time actually got it to latch. Now she has moved on to closing the bathroom door (which is open since we have no kittens in there) and the door to the second bedroom which has all the cat stuff in it (which won't close all the way due to being blocked open, but that doesn't stop her from trying). 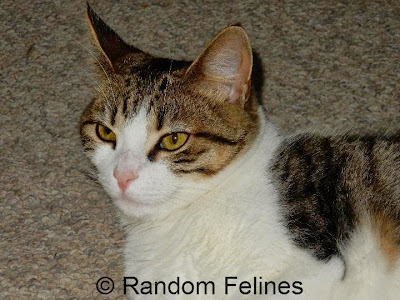 Nashville has a new hobby too. Wake up the mom at 4:30am. He is out and about 24/7 and sleeps on the bed sometimes. The other morning mom rolled over....and there he was. And since he figured mom was at least partly awake, he proceeded to roll around and get all lovey....and stick his toes up her nose. She finally had enough and grabbed him and shoved him under the covers. Fortunately for all involved, everyone got back to sleep pretty quick at that point. :)
~~~~~~~~~~

We suspect no new little kittens for a while. Mom has a plan for the dining room. With two towers now, she wants to set things up so that we aren't putting kittens in the bathroom unless we have to. First part of the plan is doing some measuring to see what fits where, then she wants to plan out rearranging the furniture. Then get the carpets cleaned and reorganize. We will keep you posted on her progress.....
Posted by Random Felines at 6:30 AM