About the Wordless Wednesday pics....Topeka actually is in all three pictures. Thankfully mom had her camera right there and managed to get the shots....the legs were a classic moment. 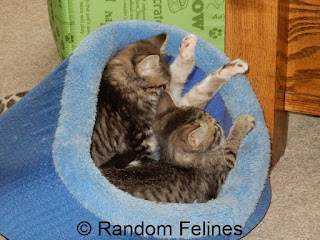 Reno, Topeka and Anise all had their spay/neuter surgery on Wednesday. And all spent Wednesday evening passed out around the house. Mom picked them up mid afternoon and locked them in the bathroom until she got home and then let them out. Once out, they all picked a spot and went back to sleep. Topeka's spot was on mom.... such a tough job she has. 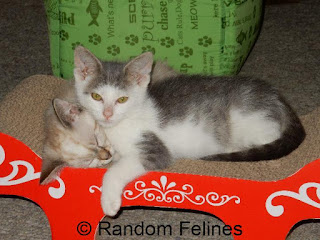 Nashville was very bored that evening...no one wanted to play with him except Daiquiri and he isn't quite so sure what to think about her. He spent a lot of time running around in circles trying to entertain himself.

Nashville has a gooped up eye so he will be around a little bit. There is an adoption event tomorrow that mom will take the other three too and then they will go up to the adoption center presuming there is space.
~~~~~~~~~

If you didn't see it, our Morocco momma cat was adopted Wednesday night!!! Nice family and they have renamed her Maru. They do have another cat so there will be an introduction period. And....the new mom brought her sister and she adopted a cat from the rescue as well. WOOHOO!! 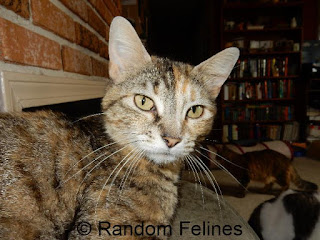 Daiquiri had a sad Sunday night. Normally our foster kittens are put in their own space at night...allows them to have kitten food and also allows the rest of us to sleep in peace. However, if we have a kitten for a while that is a little older, they are allowed out 24/7. Think Jake and Elwood, Uncle Bill, and now London. It is a pretty short list actually.

Anyhow, as mom would be getting ready for bed at night, Daiquiri and London would chase each other around the bedroom - under the bed, under the dresser, under the night stand and around and around.

London went home Sunday morning. And Sunday night, Daiq came into the bedroom and went....under the bed, under the night stand and then under the dresser. Mom wondered what she was doing, then it dawned on her....Daiq was looking for London. OMC!!! So mom stroked Daiq and tried to explain the boy went to his forever home. She hasn't done it since so maybe she realizes he isn't here anymore. Poor kitt.....
~~~~~~~~~

We still got the hots, so we are enjoying the cold air vents for a while longer. It is a holiday weekend here in the US, so we will be off until Tuesday (unless mom feels motivated, but don't count on it - MOL). Have a safe and relaxing weekend!! 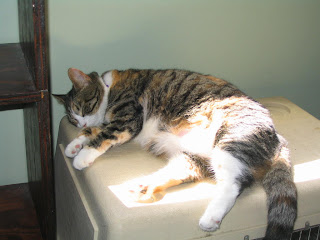