We have some sad news....If you follow us on social media you have already heard this, but....

She hadn't been feeling well over the weekend and stopped eating on Tuesday. When mom checked on the kittens at 1am on Wednesday, Cinnamon wouldn't stand, she was very dehydrated and her gums were very pale. Mom isn't prone to panic but was sure something was going on and was afraid to wait until morning. She packed up Cinnamon and headed off to the emergency clinic. They admitted the baby and kept her overnight.

The vet called about 7am on Wednesday and said that there was every indication that it was FIP. There is no definitive test, but you can rule out just about everything else. Cinnamon had fluid in her belly and that is a major indicator. Mom will NEVER let any of us suffer so she texted the head of the rescue and let her know that the clinic needed to hear from her but that mom was ok with letting Cinnamon go.

We hate this stupid disease. It took Coral from us and we know others out there that have had cats and kittens die from it too.....we hope maybe one day they can find a cure or better yet a vaccine. 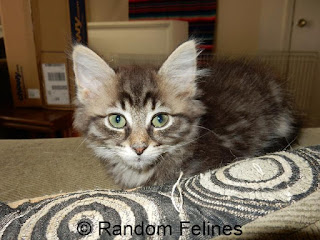 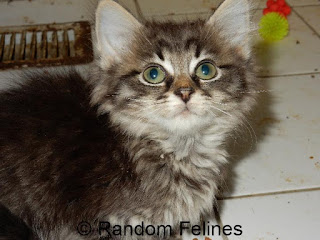