Mom was supposed to do a bloodhound run on Saturday, but it was cancelled due to lack of drivers. Don't worry though, they found a long haul trucker willing to help them out and by Saturday night Scout was with his forever family. :)

Everyone here seems to be doing better. Mom thinks she may have been using an old batch of meds, so she got a new batch and it seems to be working better. Oliver still has runny eyes, but nothing as bad as it was. 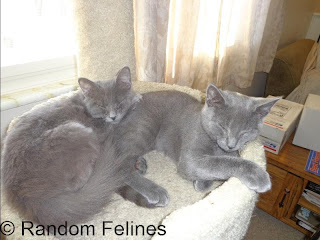 Speaking of Oliver, he had an adventure the other day.

We think we have mentioned the set up of the condo before....you come in the garage, go up half a set of stairs, turn and go up another half set and then the condo is all on one level. 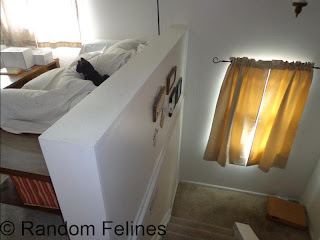 Well Oliver was up there and started chasing something. And....he fell off....and that is about a 10 foot drop. From the thud, mom suspects he didn't land on his feet. Mom checked on him and he was just sitting on the landing. As mom started down to grab him, he bounced up and took off past her up the stairs. Ugh.....those kittens are bound and determined to give mom a stroke. 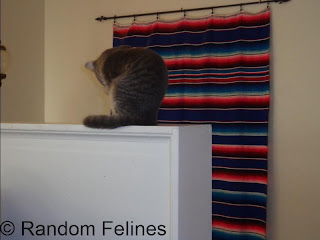 We all love to sit up there (that is Elwood) but we don't normally fall off.

Sunday there was an adoption event held at the local Mars manufacturing factory (think Pedigree and Whiskas). They invite 12 groups each summer to a big event. Our rescue wasn't there but our friend Miss Karen was there with the cocker spaniel rescue so mom drove over to check it out. 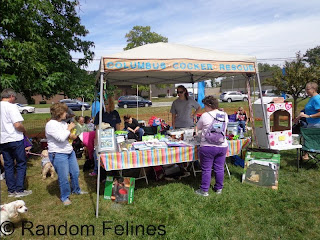 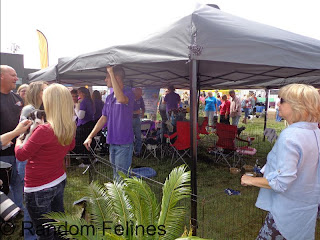 Mom left at about the 1 hour mark of the event being open. At that time, 1 cat and 20 dogs had already been adopted. It was great weather and an amazing turnout....there were people everywhere.
*Final adoption count was 76 dogs and 14 cats!!!
Posted by Random Felines at 6:00 AM