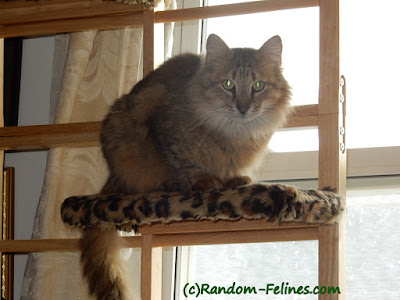 For those unfamiliar with his back story, we got a call from one a neighbor of mom's parents that she had found a kitten in a box and was unable to care for it. Mom had Ivy and her sister and mom cat at the time for the local humane society, so she took the kitten right away to be tested (negative - YAY) and when they asked for a name, she looked at the tiny ball of long brown fuzz and said Spud - which stuck. He was raised with Ivy and her sisters and the original plan was for him to go back to the humane society with them, but that didn't end up happening and he stayed.

He was sort of friendly as a kitten, but still fearful. His fear level only increased when Junior was added to the family. And it got worse over the last years to the point where mom was unable to catch him to do anything.

Over the last several months, his health has declined. He was losing weight and having other issues. Since he can't be caught to be medicated, mom knew something had to be done but put it off know that things probably weren't good medically and she would have to make some tough decisions.

He got gradually worse over the last 2 weeks and it became apparent to mom that she needed to "adult" up and make some decisions. She gave him some meds to help calm him (and help her catch him) and then dropped him off at the vet. While the vet couldn't give her any definitive answers, she did say that while they could treats symptoms, it may not be a fix. Mom has struggled with this for a while and knew that bringing him home and trying to treat him would just be more stressful for him.

With many tears and a broken heart and wishes that things could have somehow been different, she decided to let him go peacefully.

Love you Spud - may you find peace
Posted by Random Felines at 6:30 AM

Email ThisBlogThis!Share to TwitterShare to FacebookShare to Pinterest
Labels: spud