Well, winter may not have "officially" arrived here in the midwest, but dang it got cold. We've even had some of that white stuff fall from the sky and may see some again this weekend. 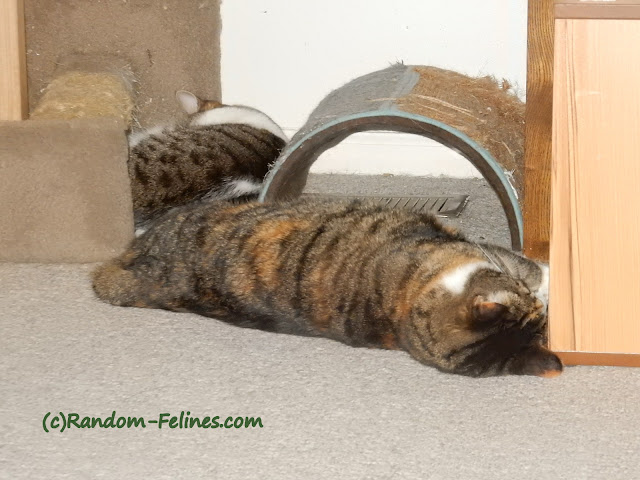 If you look closely, you can see the floor vent under the arched scratcher. Mom moved the scratcher over there and Mozart used to use it as his mancat cave. Yep - he would crawl in there and sleep ON the vent. What mom discovered in the meantime is that with no cat sleeping on the vent, it does direct the warm airs out into the living room some. And when she looked over the other day, she found two lazy girl cats sleeping like this. (and she would like you to know the house is NOT set that chilly)

~~~~~~~~~~~
The Texas kittens are much less snotty and seem to be feeling better. In fact, for the first time in over a week, they made an escape attempt out of the foster room into the living room. Fortunately they come right back when they hear the sound of the food can opening. Still another week or so of meds, but they are on the right track.

The goal is to get Blueberry neutered next week too.