keeping us on our toes

Mom took the little ones to the v-e-t on Friday just for a general check up since they are so small for their age. The v-e-t was busy (they squeezed us in) so we didn't get a whole lot of time (though one of the girls was cat-napped and carried around by a tech in her pocket for a few minutes) but the general consensus was keep on eye on them, make sure they are eating and bring them back if something pops up.

Marilyn is becoming less interested in nursing, so it became a little more imperative over the weekend to get the monkeys to eat something else. In fact, she has discovered she can get up on the vanity in the bathroom, so she does have a spot to escape. haha

The kittens are eating the kibble left out, but the brandy kittens are so tiny that the concern is how much are they actually eating. Mom tried several different kinds of canned food and FINALLY found one they will eat. It isn't her first choice, but hey....they are eating and they love the stuff (the girls growl at each other). So mom decided going for calories over content for the moment. MOL 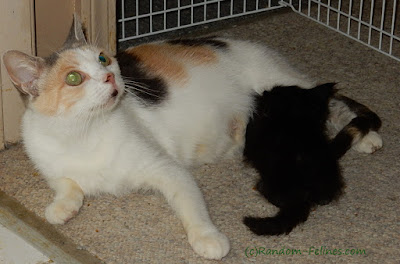 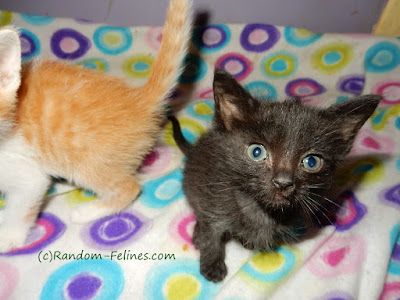 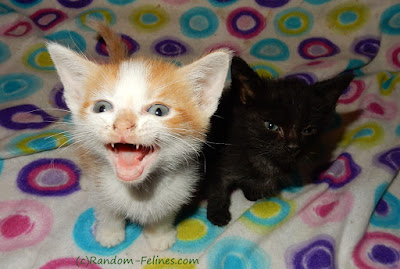 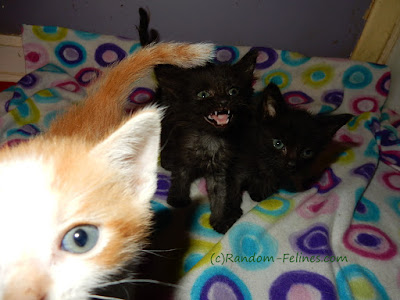 MEEEE TOOOOO
(says one of the girls)

Russell likes to throw his weight around which makes the girls scream. Of course, they tend to give as good as they get, but since he outweighs them (by about twice), mom tries to get him to back off.

The hope was to move them into the actual foster space, but until they are 100% with the litter box, mom is leaving them in the bathroom. That being said, she had to turn the lights on around 2am the other night as someone made an escape when she tried to get in there.

They are certainly bright and active and playful, so for now mom is just continuing to do what she is doing and we will see what that gets us.
Posted by Random Felines at 6:30 AM