We wish we could explain to you why you were caught and then put in a big crate with your kittens. 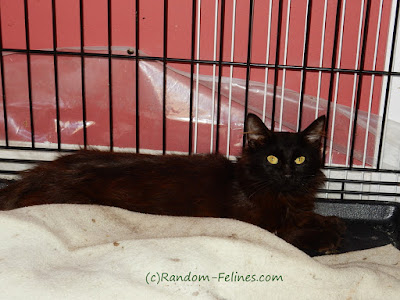 We wish that we could explain to you that living in a house with a family is a good thing. 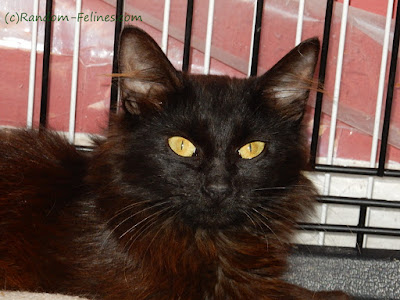 But sometimes that just isn't meant to be the case.

We do make you this promise.....we will take VERY good care of your kittens.
We will raise them and help find them loving homes. 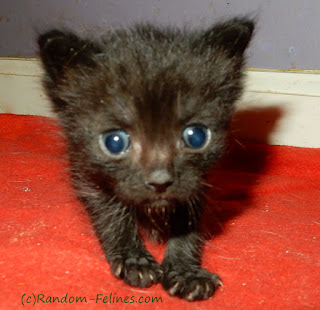 
**note from the mom: the plan originally was to move the kittens in with Marilyn (the other momma car) over the long weekend. That went fine. Fiona has gotten more and more stressed over the last week - the minute I would enter the foster space (the door has a creak), she would start to growl. She never lunged at me when I opened the crate to clean her box or feed her but I suspect it was only a matter of time. She did swat at me once through the back of the crate however when I was moving something and got too close.

However, getting her caught and spayed didn't quite go as planned. I had the trap upstairs Tuesday morning with the intent of getting her to go in and then dropping her off at the clinic. Instead, she shot out of the crate. Around the foster room, up the curtains, across the large shelving unit and eventually up the screen door....and into the condo. CRAP! I tried to corner her by the front door but no luck. She got cornered by the TV, but I am by no means dumb enough to stick my hands any where near her.

Eventually I got her back downstairs and herded her into the garage. Thinking later, I had her pinned behind a table in the entry way and might have been able to get her into the trap, but let's be honest - it was early, I was now hot and sweaty, and honestly, my blood pressure was probably through the ceiling after a couple of fly bys from her.  I set the trap in garage and went to work hoping a couple of hours of calm and quiet would work in my favor. I went back home, taking lunch early (if you can get a feral in a trap to the clinic before noon, they can be done same day) but no luck.

Here is where I make a hard confession: I am certain she somehow managed to get out of the garage. I left the trap and food in there with the door closed for 2 day. The food was never touched....and she was always willing to eat. Hopefully she will stick around....there is food, water and shelter available in the garage. Hopefully Allie will find her and they can be a pair. I will keep my eyes open and keep setting the trap in the hopes of catching her. I just feel like I failed her in that final step....but I will keep trying.
Posted by Random Felines at 6:30 AM