Junior was keeping an eye on things this weekend. Alder has discovered he can climb OVER the doors and get out of the foster space - he lands on some shelves then jumps on the chair. So far he is the only one and he does seem to stay in there overnight, but mom suspects unless he goes to the adoption center soon, she is going to be sleeping with an orange kitten some night. 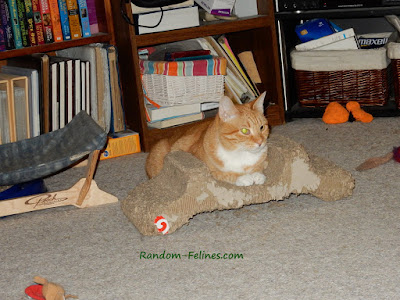 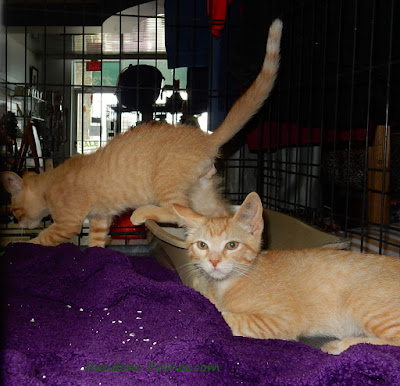 Saturday was an event sponsored by NBC/Telemundo called Clear the Shelters. There were 35 adoptions from Colony Cats (our rescue) and there were 5 local rescues participating and 190 adoptions total in central Ohio from those 5 rescues. The last report we heard was 45,060 total adoptions nationwide.

The thing is, adoption fees were requested to be lowered - but the fees were not subsidized like they are for some events. Which means that rescues involved in this event, even if they did lots of adoptions, took a beating on adoption fees and lost money. If ever you have considered donating, now would be a good time.

There were some concerns that mom saw online about people coming out just for the reduced fees. And while mom did hear some people say that, the adoption process for our rescue doesn't change...we still check people out and still will say no. A good number of people knew the event was coming and had filled out applications in advance so they came in pre-approved and just had to finalize adoptions. 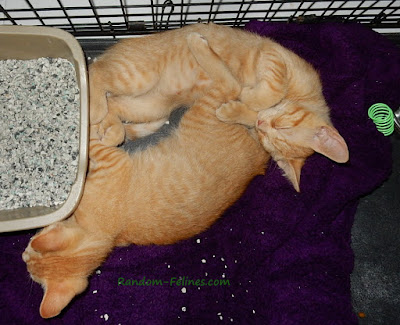 Cedar was adopted along with another kitten from the rescue (Link was a short hair orange and white tabby). The family has a 1 year old female cat at home (we bet SHE was surprised) and 3 kids. He turned on the charm and the mom of the family couldn't resist him.

Alder and Birch came back home with mom after the event and then went to another one on Sunday at the store where mom cleans for our remote adoption kitties. 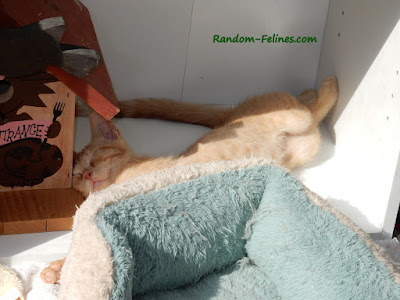 Otherwise, it was HOT and HUMID here....yuck. Fortunately we have a/c and that kept it cool inside.

Sumac and Hemlock were dropped off this morning for their spay surgeries. Juniper was acting kind of snotty, so she will be sticking around for a few days.

Have a great week....drink lots of water, stay out of the heat as much as you can, leave water out for the animals, and please check on your neighbors.
Posted by Random Felines at 8:22 AM