They are getting more and more active for the most part. Mom caught Muscari trying out the canned food the other day, but no one else seems interested yet. So long as they are doing ok in the weight department and active, mom isn't too worried about it. One would think Amaryllis would be ALL OVER those kittens eating on their own, but she doesn't seem to care either. 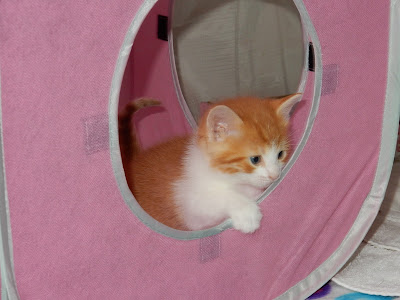 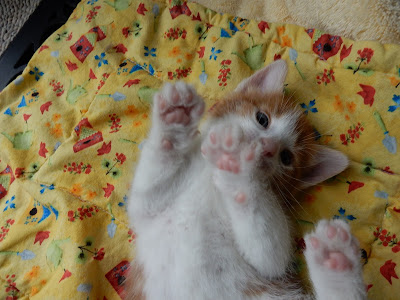 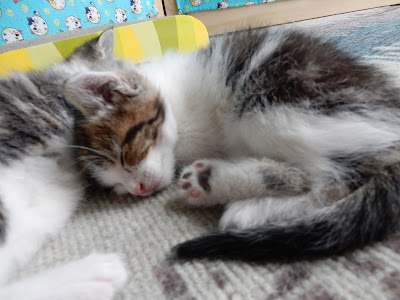 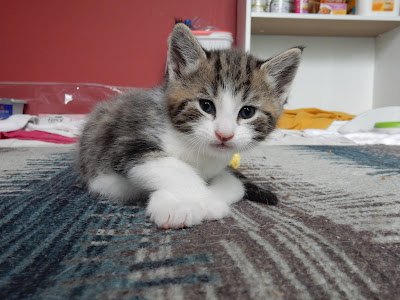 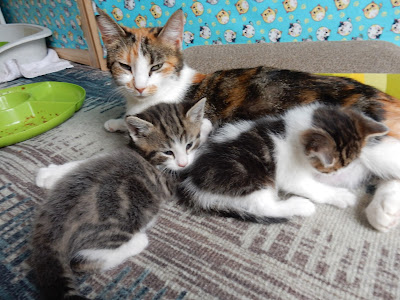 lurv their momma and the milk bar
(Muscari on the left, Trillium on the right)

Mom noticed last week that Trillium weighed about the same and was coughing some. She checked in with the rescue and the whole crew made it to the v-e-t on Tuesday. Everyone was unimpressed - except for Dandelion who got all hissy and spitty and made mom and the v-e-t and their student laugh.

Anyhow, after some x-rays and consulting, the v-e-t called mom back and the kittens all seem to have pneumonia. YIKES! The rescue started them on meds on Saturday, so they will continue with those for another couple of weeks. Trillium is the worst followed by Dandelion. Muscari and Orchid have spots on their lungs but it isn't too bad yet. The biggest thing is keep them on the medication and make sure they keep eating. The rescue is giving us a nebulizer to use for them in addition to the oral medication. Hopefully no big deal and they will be 100% pretty quickly.

Mom is also investing in a battery backup for the web camera. She talked to a guy last night who is techy, and he suggested that it may not be the router or the speed but it may be a fluctuation in the power to the camera and it shuts off. A one time investment in a backup is cheaper than increasing the wifi speed - and he didn't think that was the issue. Mom is going to check all the connections too and see if she can move the router and plug that into the backup as well. Wish her luck. If this works, the camera should be on more consistently (which will make mom happy...she hates when she gets to work and the thing is offline - especially now with sick kittens).
Posted by Random Felines at 6:30 AM