Funny story: so mom moved some things around in the foster room again and thinks she likes this set up. She took out the chair since the kittens were sleeping under it and couldn't be seen on camera. With Trillium coughing, she has been checking on them during the night as well. Last weekend, she got up and looked through the screens. Amaryllis was sleeping in the middle of the floor....and there wasn't a single kitten to be found!!Not what anyone wants at 3am. Mom went into the room....the kittens had flipped over the pink cube and were piled up sleeping inside (except Dandelion...he must have been part way in when it flipped - his head was IN the cube and his body was UNDER the cube). 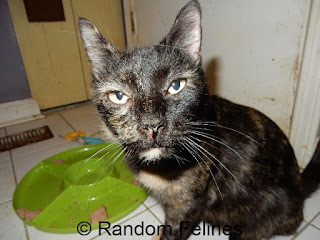 Remember this momma cat? This is Lille of the French city kittens. And....after finally healing up from that abscess, she went to one of the remote adoption locations and was adopted!!!
~~~~~~~~~~~~

We are hoping for some open windows this weekend since it is supposed to be nice (at least on Saturday). Mom said she is going to be busy trying to "get things in order" since her next few weeks are going to be busy. We did get her morning off with a bang as some cat threw up on the kitchen counter and hit her phone and the kindle. And some big headed nameless kitten will be getting a bath when she gets home from work - the accuracy level in the foster room isn't quite 100%.
Posted by Random Felines at 8:39 AM