About the flashy box. Mom knows she used it last Friday to post our weekend editions. She had the picture of Junior on the camera. But, someone had yakked on her chair so she was sitting on the sofa with the laptop on the coffee table. She got the picture loaded and eventually put the laptop back in its case. But she thinks she may have left the flashy box on the coffee table. And it has a stringy attached to it for people to slip over their wrists. And..... still no sign of it. And mom says she refuses to pay another $100 for another camera (she just got this one this summer after the other one died) when the minute she does the old one will show up. So instead she went to Wally's World and bought a cheapy. rats.......
~~~~~~~~~~

Opal's paw: sometimes after having in IV, there will be some swelling. Only, if it is fluids, the swelling will go down. Opal's front paw kept getting bigger and BIGGER. So mom took her BACK to the v-e-t. She has cellulitis (infection of the skin and underlying tissues). So now she is on a different aunty-biotics. Opal is still running around and being active and eating and everything but man does it look uncomfortable (it is about 3x the size it should be). Mom and Opal saw the same v-e-t from Thursday night/Friday morning and she was very impressed about how much better Opal looked and felt. Just...healthier. :) 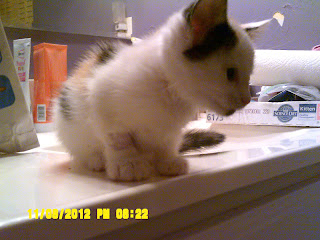 Tim got whapped....again. He has 3 scratched down his poor nose. (we would show you, but still no sign of the flashy box) Mom suspected that Cleo might have whapped him. He likes to go in the bathroom on the hunt for kitten food and Cleo has been a little more possessive of the kittens since last weekend. Mom heard some name calling and some banging the other night. And about 2 hours later saw the new scratches on Tim. Plus mom saw Cleo take a swing at him last night too. Gotta love a boy who can't be distracted from a possible treat by a ticked off momma cat. :) 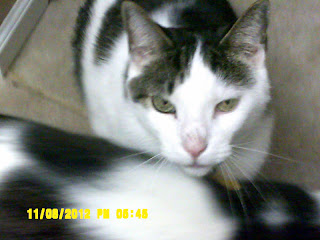 Gin and Moonshine are headed back to Petco. There was another adoption. So now there is a bigger kitten (named Toby) and a little kitten (named Belle). Mom put them together on Wednesday but this weekend will be the first chance she has to take Gin and Shine back up there. The goal is to keep the cages separate and hopefully that will help to keep our kitts a little calmer. They have been great at the house and mom knows they will be a great addition to a family out there. 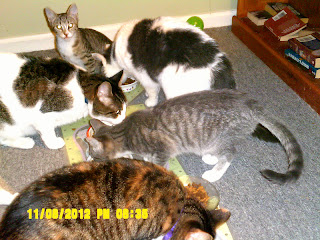 Some comments from the week (we love reading your comments BTW):
Brian (11/5/12): What a day! We are all sending purrs to Grandma and the little Germ kitties.
This one cracked us up....we know it was a typo, but considering the kitts were sick, it was pretty funny.

We hope you all have a great weekend. No transports and no Sparty football this weekend. Mom said something about the sucky beast and laundry though. And maybe a a few naps. We can get into that last part - it is supposed to be nice here on Caturday so maybe we can bribe her to crack a window for some whiffies.
Posted by Random Felines at 8:28 AM