Our grandma is doing much better and we hope that she will be heading home today. The first couple of days were the worst, but she is up and walking around more and that will help. Plan at this point is home Saturday. She can get up but still needs to work on walking the halls.
~~~~~~~~~~

Cod help us - the v-e-t showed up here for Halloween. We was TRICKED!!!! (and got no treats) Ivy, Tim and Tom were due for vaccines and mom has Maestro get the "old man" check every 6 months. Maestro was good - he even gained about 1/2 pound since this spring. YEAH!! Tim has lost about a pound...and need his teeth cleaned pretty bad. Mom had the v-e-t draw some blood and will make an appointment with a local clinic to get the teeth cleaning appointment (our vet is mobile and doesn't do surgery). Tommy gained about 1/2 pound and is doing well.  And then there was the princess.....man was she crabby. There was some screaming and bad werds (from Ivy, not the v-e-t). And - she has gained about a pound since last year. Which puts her at about 12 pounds. Ugh..... so mom is gonna have to do some figuring as to how to make sure Mo and Maestro get enough to eat and Ivy can't eat EVERYTHING IN SIGHT!!!
~~~~~~~~~~

Alley Cat Allies posted an update on their facebook page about the status of the feral cat colonies at the Atlantic City Boardwalk.

Bourbon was a lot of help with the v-e-t. He moved her stuff, tried to chew on her stethascope and walked over her computer keyboard to reset a couple of things. He finally got thrown in baby jail with the kittens (cause Ivy was in the bathroom) and....he can get out. It took him about 10 minutes to figure it out, but once he did mom knew she was in trouble. The nice part is that Dr T was pretty charmed by the boy. She isn't in the market right now as she has a REALLY old cat, but maybe someday (and mom said "if you know anyone").....  :) 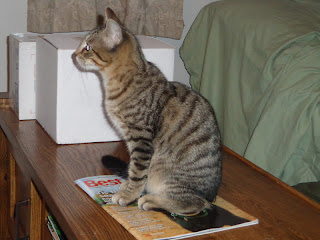