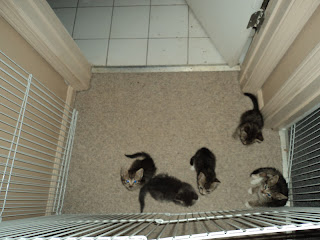 Mom released the foster monsters on Sunday for a little bit. They came storming down the hall and played for quite a bit. It is funny to see them with Doc and Sally who are so much bigger..... 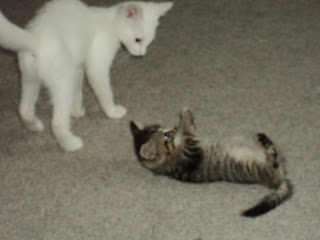 back off big white hairy guy

They were very good and spent over an hour running around until mom put them back. They are still pretty little (all right around a pound with Moonshine & Whiskey being the biggest at just over a pound).
Once mom got everyone back, she realized that Bourbon was MIA. She searched and found him sitting on the stairs watching Doc play in the entry way. She called and Bourbon started bouncing back up the stairs. Mom had to get it on video she was so proud. Some might find it hard to watch cause he does struggle a big (mom cut his nails after this since that seemed to be a big part of his problem) but she was so proud to see the little guy make the effort. He does run funny but he gets around and plays just as hard as all his relatives.

Posted by Random Felines at 8:52 AM

Email ThisBlogThis!Share to TwitterShare to FacebookShare to Pinterest
Labels: alcohol kittens, doc, fosters on the loose