So mom ended up taking Bat, Mohawk & Daffy back to the shelter last night. It was as hard as always. Daffy is in  with 3 other kittens - one is an orange male tabby named Simba and they seemed to have become friends by the end of the night. Mohawk and Bat were together.

Mom said for a little while to make sure they got settled in ok. A woman came in who has a special needs cat with Cerebellar hypoplasia which is a disease that makes cats wobbly but doesn't affect their lifespan - they aren't in pain, they just walk a little differently. Anyhow, Peanut is about 1.5 yrs old and in need of a companion. She met a few kittens but no one seemed to jump out at her. We tried a 1 yr old cat named Smudge, but he didn't seem overly interested. :)  So mom introduced her to Mohawk - she thinks a kitten might be an easier introduction to her other 2 older cats (which is probably true). It was love....mom told her that Mohawk is a combination of wise old man and vacant kid. He gave her his patented blank look which made her smile. And then she leaned her head down and he kissed her forehead.....mom thinks that did it. 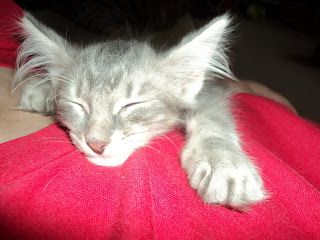 Greta was pretty lovey when mom got home from the shelter. She wanted up and was asking for attention. Always a good sign. Gizmo was off doing his own thing....  Greta did cry for a few minutes when they were put in the bathroom last night, but she stopped pretty quick. Still made mom a little sad though.

No plans for the weekend....but it is supposed to be cooler, so hopefully some window whiffin'!!!

Posted by Random Felines at 8:56 AM