As it was left on Monday, Mopar had broken IN to baby jail twice Saturday night and Sunday morning. Mom decided to surrender since the last time (Mopar wasn't going OVER - he was pushing the gate) resulted in Cricket getting out and wandering around the room. 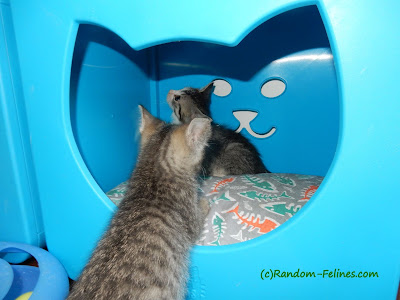 Mom took the pen done Sunday morning and let everyone mingle. There was some name calling, the little kittens bounced around and occasionally put on their "stranger danger" outfits. All in all however, it went fairly well. Meal time is taking longer as mom has to stay in the room to make sure that everyone gets to eat....some of them aren't very good about staying in their own spots. 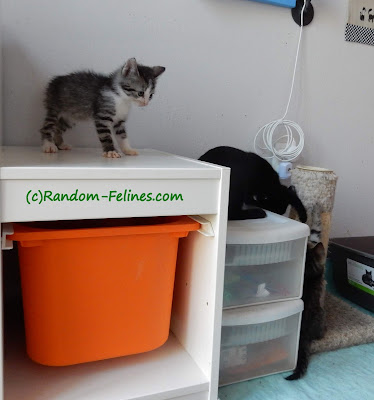 Lane leans over to give a little kitten a good whacking 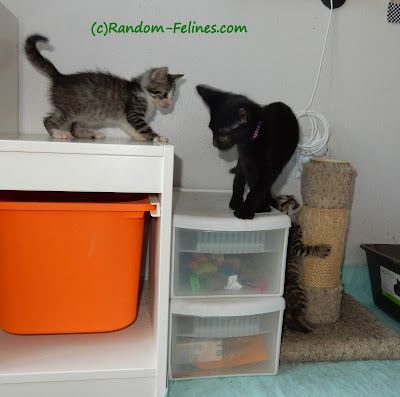 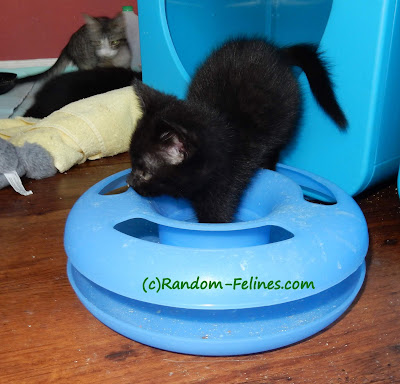 Beetle checks out the track ball.

Considering that the bug kittens are less than half the size of the single kittens, it has been going pretty well. Luckily Fate and Lane have decided that the little ones can be fun, but bouncing on each other is MORE fun.
~~~~~~~~~~~~

In other news: the single kittens went yesterday for their spay/neuter surgeries. Fate and Lane are doing well and are now ready for their new homes.

Mopar however was having some issues. We had been treating him and hoping for the best, but he looked bad at the clinic yesterday. They tapped his belly and pulled out yellow fluid which is a sign of FIP and the director of the rescue authorized them to euthanize him. Mom is heartbroken. He took a while to come around but once he did he became a wonderful and lovely boy. Mom spent some time in the kitten room on Monday night and gave him lots of love. 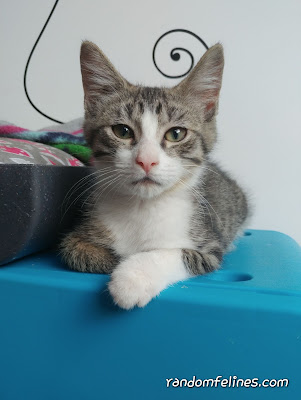