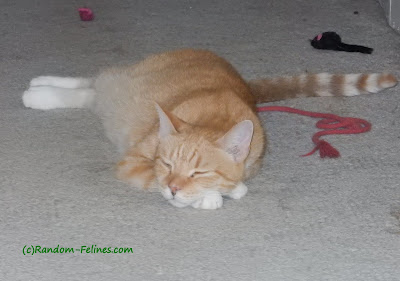 Junior was acting as guardian of the hallway. It never ends well as Ivy will have to walk past him and name calling will ensue. 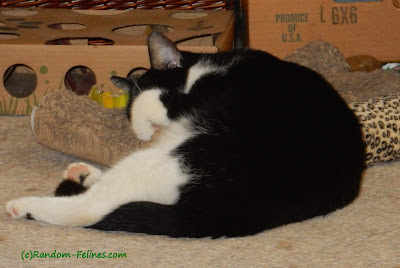 It was a supremely lazy weekend around here. Mom spent Saturday getting stuff down around the condo and spent Sunday doing....nothing!!! Chanel thought that was a great idea. 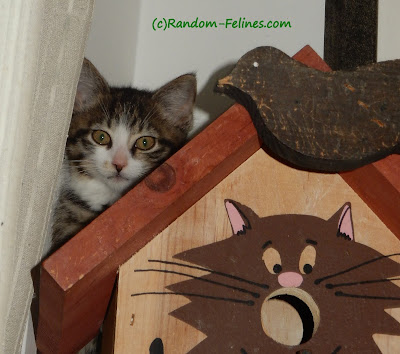 If mom would have realized how much time kittens would spend BEHIND the bird house, she would have put it up there differently. Goldfish likes to sleep up there but the little kittens tend to run up there to hide if something startles them. The trash truck, mom throwing a box down the steps, the vacuum cleaner....if it is scary, the birdhouse is the place to be. 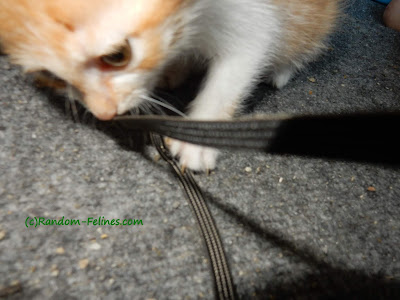 Mom was trying to get pictures....Peroni was NOT helping. That camera strap is fascinating. Mom hasn't weighed the boys, but she did weigh Peroni on Friday. She weighs....just over a pound. No doubt she lost some weigh while all of them were sick, but she is still about half the size of the boys.

Ivy has gotten much friendlier with the weather change and decided she sometimes wants to be a lap cat....
32 seconds with Ivy