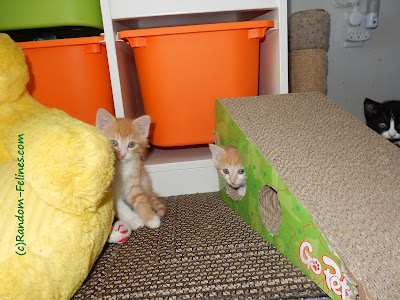 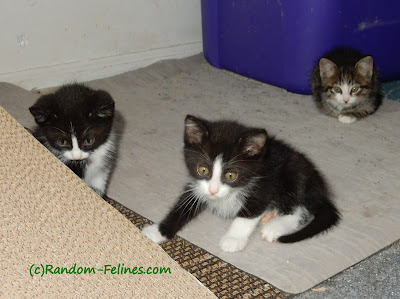 the tuxedo boys and the brown tabby boy in the back
*if you look close, their markings are similar but one
has "bigger" white marks than the other 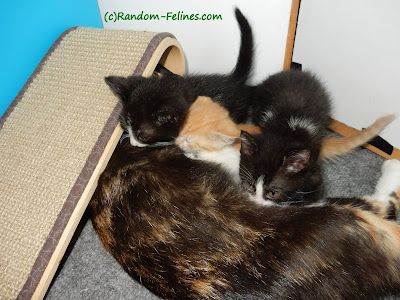 running over their sister for a snack 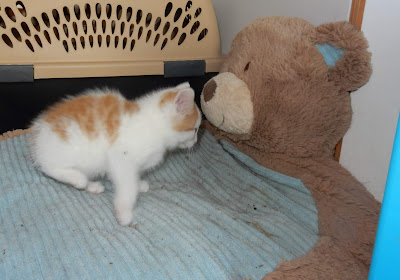 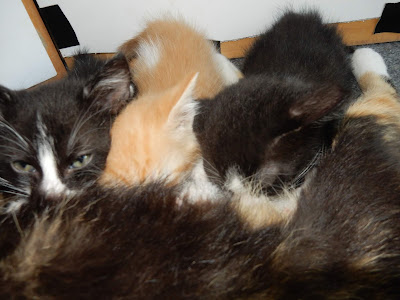 Mom has to be honest here....the momma cat of this crew is giving her heartburn. Momma cat is better than she was Saturday, but still weirdly growly. She finally let the kittens nurse on Sunday. Yesterday when mom was in there she wanted some attention though wasn't seeking it out. She nursed the kittens and even chirped at them to get their attention. Mom left and about 30 minutes later the momma cat was growling at them again.

Mom looked at the pet store yesterday when she was cleaning, but the only diffuser they had was for marking, so she is going to have to look around. For now at least she isn't hurting the kittens and is letting them nurse, so we are willing to put up with her weirdness. Plus as mom says, us permanent cats don't seem too concerned about the momma cat's racket in there, so that makes it a little easier.

Mom is having problems picking names for this crew too. She thought she had a theme but isn't committed to it. With a mom, 5 boys and 1 girl, it's a little hard.

The kittens are fairly friendly. The orange boy with more white and the brown tabby are jumpier than the others, but they are fairly curious and will come over and check mom out. Fortunately we will have them for a while so mom has time to get them all friendly and sweet.
Posted by Random Felines at 6:30 AM