Over the weekend the little kittens seemed to be doing much better and mom decided she REALLY wanted the bathroom back (nothing like tripping over 6 kittens at 3am if you have to pee).

So Saturday afternoon we had a round of "meet your new partners". And it was chaos.

The room suddenly seemed a WHOLE lot smaller with 11 kittens in it all at once. Plus the design kittens seemed to suddenly double in size.  MOL 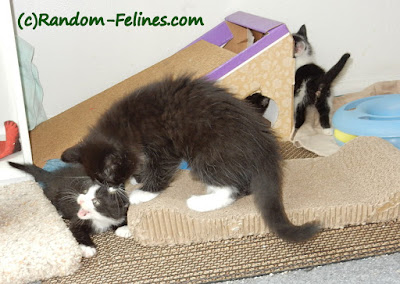 Armani had to taste test someone....notice the outrage 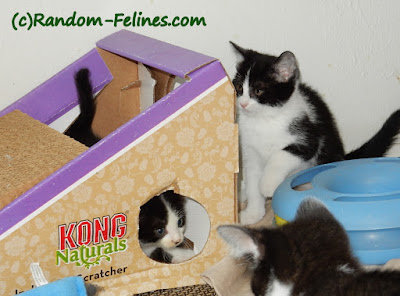 Dior in the back checking out an interloper 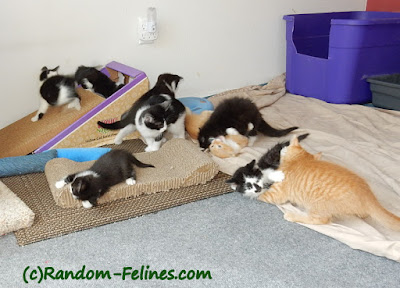 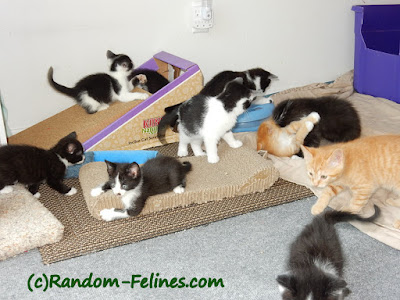 Mom did some more research online and discovered before the "Sinatra Rat Pack" - there was another Rat Pack in the 1950s and she is going to use those names. Now she just has to figure out who is male and who is female and get them to hold still long enough to tell them apart. Girls: Bacall and Harlow (ok - not sure this is historically accurate, but mom likes it). Boys: Bogart, Flynn, Rooney and Romero.

The older kittens are being....pretty good with the little ones. Though mom would check the camera is she heard baby howling and sometimes they were just beating on each other. Chanel is VERY unimpressed with the kittens and keeps her distance when possible. Dior is better than her sister though she will hiss if she gets startled. Gucci and Armani are pretty much go with the flow. And Versace is pretty sure mom just blessed him with 6 new cat toys.