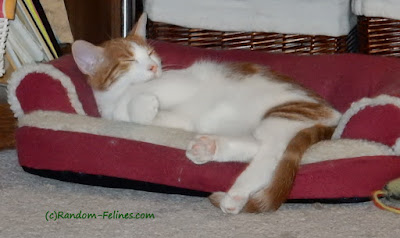 Anyone looking for a super sweet, laid back,
slightly snorty orange teenage kitten???
We will make you a good deal.....

He was still acting and sounding nasty the last couple of days. The v-e-t called mom last night with the bartonella test results (negative - ok, so we know it isn't THAT). Mom mentioned he was still snorty and not running around like he should be, so she dropped him off at the v-e-t office yesterday on her way to work.

Dr B called about 2pm yesterday. She is just as frustrated as mom about this whole thing. Dr B spoke to an internist and they went over what meds he has been on and his background. He does has a diminished lung capacity on one side, but the belief all everyone is that is damage from the pneumonia he had when he was tiny. The chest x-rays really haven't changed, so they are saying that is just something that he is going to have to live with - and probably won't cause too much long term issues though it may be why he isn't as active as some other kittens his age all the time.

But the snotty thing is a different issue. The head of the rescue suggested culturing the snot.... but the internist said that while we could knock him out and do that, it may just come back as the feline herpes virus which really is just something he would have to live with. The cost and the risk of it just isn't worth it to the internist. And mom is ok with that. However, what to do? He is on the rescue website and petfinder and can be adopted from our house without going back to the rescue with lots of other cats. However, it is hard to do that when people can't see him and it is also hard to explain to people that his breathing issues are most likely chronic and not "fixable". Ugh.....

Mom left him overnight at the v-e-t office. They have him set up in his own space with a vaporizor. The internist did suggest "a quiet home with maybe 1-2 other cats". Ummm sure - is HE going to take him???  Funny man....  Right now the plan is for mom to pick him back up after work today, see how he did overnight and if that changes anything.

We appreciate all the kind words and purrs for Dandelion. Hopefully we can get some answers and then find him a home willing to accept him on his terms.

(and NO he is NOT staying)
Posted by Random Felines at 6:30 AM