As some of you who have been with us a while know, we are doing TNR in our neighborhood. It started up the street with mom and another neighbor lady when there were kittens found (that would be when mom found Bug). Then Junior was trapped. Then more kittens....and they managed to get 2 girls and a couple of boys. Mom then trapped Allie at our end of the neighborhood. And things have been very stable for years.

More recently there have been sporadic sightings by mom and the other lady of two big males tabbies (OK - we can't be SURE they are boys, but mom says based on the size of their heads, she is 90% sure). And those boys are elusive....both mom and the other lady have set the trap a few times and got nothing. (that's not true...mom got Allie once - MOL).

Anyhow, as mom was coming home from her volunteer shift at the shelter last night, the goldish tabby guy was laying on a nearby sidewalk. Mom was all "I swear I am gonna get him" so she put some Fancy Feast broths in a bowl (she had a sample package) and set the trap later that night.

She got up early this morning and YAY the trap was sprung.....

Except this guy was in the trap: 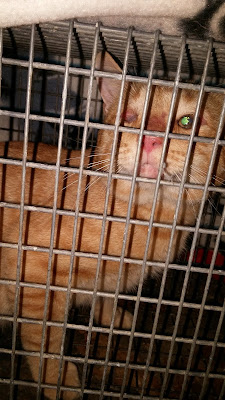 He does appear to have an issue with one eye - but mom says it looks more like a defect rather than an injury. The vet at the clinic checked him out and said he is in good shape. The eye could be an injury but an old injury. Either way they don't think it bothers him.

Either way - he was neutered, ear tipped, checked over, given a rabies shot, and then released.
Posted by Random Felines at 6:30 AM

Email ThisBlogThis!Share to TwitterShare to FacebookShare to Pinterest
Labels: TNR