You may have noticed a change to the appearance of the blog. We won a give away from Glogirly and she redid our header and made us some social media buttons and get everything set up for us (since mom couldn't do it on a bet). She has a great design site and we are THRILLED with the new look. Glorgirly - you ROCK!!!
~~~~~~~~~~~~~~~~~

There were a couple of comments that people didn't get why mom cracked herself up naming the torties. Sumac and Hemlock are poisonous....thus she thinks she is funny naming hissy torties after those trees. MOL

For those of you that didn't see it on facebook or instagram, there was a 6th tree kitten and he was finally caught on Tuesday. Mom picked him up Tuesday night and he is NOT happy about it. His brothers hissed at him a little and then went about playing. Hemlock curled right up with him. Like the hissy girls, he isn't happy about being grabbed, but will tolerate being held. The goal is to get them not only to accept attention but come looking for it (thankfully we have time to get there). 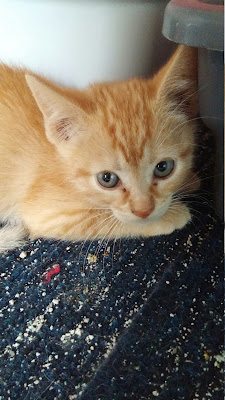 Everyone seems to be feeling much better thankfully. If they get back to 100%, the flower kittens are ready to go and get themselves adopted.
~~~~~~~~~~~

Also, for those of you that don't follow us on social media, starting last weekend, mom put out a plea from our rescue Colony Cats for help from anyone near Calgary Canada. Miss Jill reached out via Twitter and she picked up Tora last night. While we aren't exactly sure how Tora got to Calgary, she had been surrendered to Calgary Humane and they had originally made her available for adoption. Then after determining her to be very shy and stressed, contacted the rescue that she needed to be picked up. Ummmm....we are in Ohio. Fortunately, Miss Jill has the space to take her and picked her up last night. She said Tora settled right in to the spare bedroom and was already seeking out attention. We are entirely sure what the next step is for Tora, but HUGE applause to Miss Jill for seeing our plea and coming to her rescue.