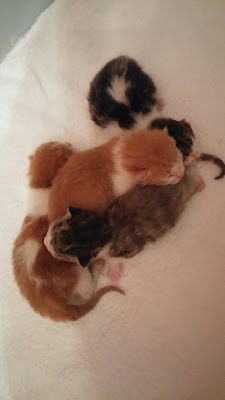 He's the guy with the gray coat (mom was hoping to get a better picture, but her camera won't talk to her computer at work....oh the joys of technology).

Anyhow, mom has noticed when she picks him up that his chest felt kind of flat. He is eating and getting around (as much as any of them do at this age) and weighs the most of the entire litter. However, it worried her. So Saturday morning she sent a text to the head of the rescue and since the head lady was going to the rescue vet with one of the adoptable dogs, mom agreed to meet her there.

The rescue lady said she agreed it felt funny but that she had seen kittens like this before and they all seem to turn out ok. She suggested that when mom is holding Muscari to put some gentle pressure on his chest/ribs. Mom laughingly said she should maybe build him a tiny straight jacket. MOL

Anyhow, the vet checked him over just to be sure. She was checking his lungs and heart and said she had some concerns he seemed to be breathing fast. Mom leaned over and said - nope, he's ticked off and hissing at you. (he had been asleep on mom's chest before all this). The v-e-t lady leaned over to look - and he hissed and her and SPIT so hard everyone jumped. Mom almost fell over she was laughing so hard. The v-e-t lady agreed at this point he was ticked off more than anything else.

Anyhow, mom is going to keep an eye on him. It may make a difference as he gets bigger and starts walking around too. Mom told the rescue lady that since he was the last kitten born, he had no doubt been smooshed in there for a while. haha
Posted by Random Felines at 6:30 AM