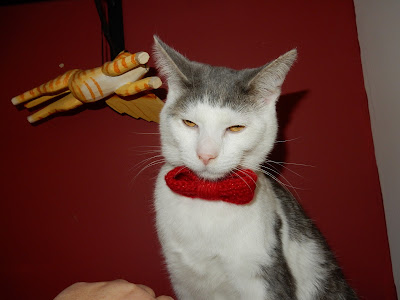 Nashville and his Valentine's bowtie

Mom bought a bowtie for Nashville to wear to the adoption event on Sunday. Miss Emily from Kitty Cat Chronicles makes them herself (and donates part of the profits to their local rescue). The bowtie is very handsome and well made - two straps of velcro hold it to a standard cat collar. She also makes flowers that go on collars for girl cats.

Mom put it on him for a trial run on Saturday and while he (obviously) wasn't thrilled with the new addition (he's never worn a collar before either), he didn't fight it. The bowtie is crocheted and pretty light weight so we think he was just insulted having to wear a tie. MOL

Unfortunately, looking exceptionally handsome made him popular on social media but didn't get him any applications at the event (he is kind of shy and doesn't put out much effort to meet new people at these events). This is now his new profile picture on Petfinder however, so hopefully someone will fall for the cuteness.

**that being said, two of the girl cats that were brought to the event did get applications, so that was good news!
Posted by Random Felines at 6:30 AM