kittens of all ages

Mom gets questions all the time about what ages of kittens we foster and what it is like. Since we have a variety right now, we thought we would discuss the differences.

Normally we get two variations of kittens: ones that are old enough to eat on their own but need time to get bigger before they can be adopted (think Almond and Acorn) or ones that are tiny but come with their mom (think Margarita and the fiesta kittens).

Of those two groups, both are actually pretty easy. Almond and Acorn had their own space while they were tested and got their first vaccines and mom got to know them. Once they were a little bigger, they started getting time out of the room to run around but still spend nights in the bathroom so they have access to kitten food without adult intruders and also to keep them out of the bedroom (the bedroom door is closed during the day). 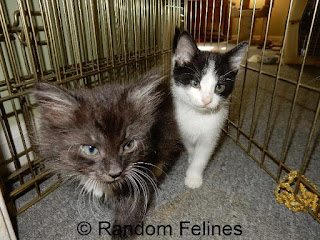 Moms with kittens are pretty easy - keep mom fed well, the room warm and the litter box clean. Mom will show her kittens how to use the box and teach them to eat on their own as well. And again, once they are big enough, they will start to get some free time out to play.

At the moment, we also have two other age groups: tiny and teenager.

Our rescue will take bottle babies, but mom doesn't step up for those since she works full time and is about 20 minutes away from home (presuming traffic isn't bad). There just is no way to be able to feed kittens every 3 hours...plus she likes sleeping at night. However, she agreed to take the apple kittens knowing they were pretty close to eating on their own (their teeth were already coming in). Here's the thing....kittens at this age with no mom are MESSY!!!! No mom to clean up after them, they have to learn to eat on their own.... you get the idea. These three are eating on their own now, but food goes everywhere. Mom is doing a ton of laundry and they are getting a bath every few days. Hopefully within a few more days they will get the hang of everything. 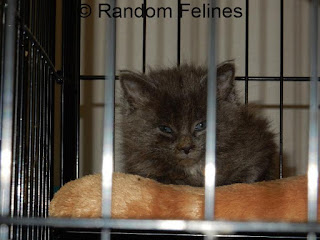 Cortland managed to avoid a bath over the weekend
His sisters were not so lucky
They do seem to be eating better on their own but
are still pretty messy about eating...food goes everywhere 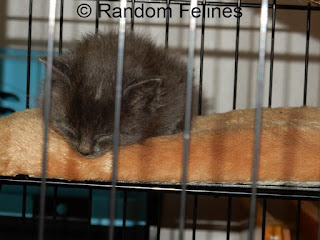 As for the teenagers - when we foster kittens we make a commitment to them. So when Tostada got sick and then Reno and Nashville got a cold, mom agreed to bring them back here. Teenage kittens (Tostada is about 7 months old, Reno and Nashville about 5 months old) are a whole different game. They are bigger, wild and crazy and generally on the move. Put three of them together and it is a PARTY!! With the other kittens in the bathroom and the tower, these guys are out 24/7. Which means running around at all hours and even sleeping on the bed. 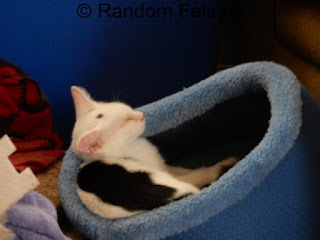 Here is the interesting part....while it is fun to see the little ones grow and get ready for adoption, it is also fun to have the older ones come back and see how they have changed. Tostada has no use for cuddling, but then she never did. But she loves to play and now that she is feeling better is constantly on the lookout for something to entertain her - and she LOVES the other kittens and of course Uncle Tim. Nashville will come over looking for attention and even sleeps with mom at night. But Reno is the one that interests mom the most....he was the last TNR kitten picked up - and he hissed, growled and spit at mom all the way home and for the next couple of days. He was aloof until he went back to the adoption center - never seeking attention and a little shy. He was kind of that way when he came back....and then mom discovered that the kitten sleeping with her at night isn't Nashville, it is Reno!! He is all kinds of lovey and will roll over for scritches and purrs and licks mom's fingers. 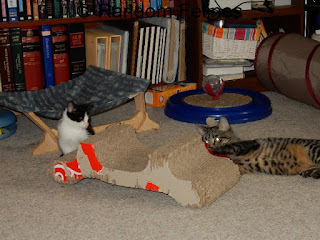 Of all the age groups, the teenagers are the most fun, but mom says she gets tired just watching them. MOL It is fun to see the little ones with moms grow up from jelly bean size to ready to be adopted. Those bottle babies though - no thanks.  :)
Posted by Random Felines at 6:30 AM