Tostada will be dropped off at 8am this morning for her surgery. We know mom will be a wreck most of the day. Not sure when it will be done, but we will put an update on our facebook page when we know more.

THANK YOU!!! for the purrs, prayers, positive thoughts and donations. Mom stopped by the rescue Tuesday night and the head rescue lady mentioned she had gotten some donations through the website (she was shocked by the Canada thing haha). She didn't know we were going to put it out there. Again - we know things are tight all over and we are SO grateful for those that are giving...and understand that not everyone can give. But keep up the purrs....right now that is most important for our girl.
~~~~~~~~~~~~~~~ 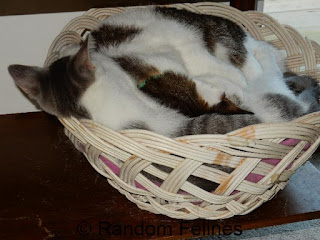 Nashville headed off to the adoption center on Wednesday night. He sure came out of his shell once his siblings left for the adoption center. He is much friendlier with mom. And boy is he a flirt!! He LOVES the ladies around here....and of course snuggling with Uncle Tim. He wasn't very happy about the car ride....or any part of being left. Until mom put him in a tower with other kittens - he curled up in a hammock with his new "girlfriend" Inge.  :)  (picture on our facebook page)  Hopefully he will go home with another kitten or cat.
~~~~~~~~~~~~~

A Moo update:
The Moos are actually are not here at the moment. Mom went to Tennessee last weekend and before she left she noticed that Devon wasn't doing so well. Since mom was going to be gone, Devon and the Moos transferred back to the rescue to be watched over. Devon has mastitis but is still nursing the kittens. They have just started eating canned food on their own, so the plan for now is leave them where they are (being in a crate seems to help Devon remain calmer) and when the Moos are eating well on their own, they will come back to us and Devon will go back to her colony. Mom stopped to see them on Tuesday and Devon hissed (go figure), Mac was busy eating, and Mollie walked right up to mom to register a complaint about something.

However, since kitten season never ends, mom brought home two other kittens on Wednesday when she dropped off Nashville. A lady had a cat that had kittens (don't get us started) and the rescue agreed to help with the kittens ONLY if mom cat was spayed. The lady got it done and we got kittens. We aren't sure if they will be honorary Moos....probably, even though they are about 2 weeks older. They are both black and white so there is that. If that is the case, we are thinking 2 more "M" names. The one on the left is a short hair male and the one of the right is a fuzzy girl.

They were a little hissy and jumpy when mom first got them home, but settled in pretty quickly. By a couple of hours later, the girl was all playful with mom even. We suspect they will figure it out in no time.
~~~~~~~~~~~~ 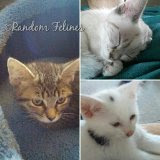 In case you missed it on our facebook page, Anise, Topeka and Reno were all adopted last week or over the weekend. Topeka has a nice young girl to spoil her. Anise was adopted with another kitten (not one of ours) and mom didn't get any info on Reno. But we are glad it didn't take too long for them to find homes.
~~~~~~~~~~~

Bee update:
Mom tried to kill them with no luck. She found a removal company and the guy came out yesterday and took the pot, the plant and the bees. There were a few bees left but the guy said a spray would kill them or they should die on their own in about 36 hours. The bee guy did say that these were yellow jackets and they are indeed evil bees and that no amount of spray was going to kill them due to the size of the hive and it's location in the pot. He said he would know more once he froze the whole thing to kill everything, but he estimated the whole hive contained about 3,000-5,000 bees. Gives mom the heebie jeebies just thinking about it.
Posted by Random Felines at 6:30 AM