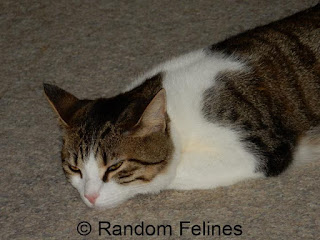 Daiquiri would like to thank everybody for their birthday wishes. She got a new spring toy and mom broke out a couple of foam balls, so it was a good day for our youngest kitt. 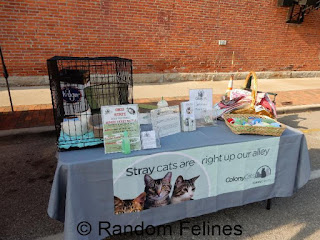 Friday night was a festival in a local suburb. They do it every Fourth Friday and the one is August is called the Dog Days and the invite local rescues to come out and set up. Mom set up a table with rescue information, items to sell and the meezer. London was a big hit and did very well. OK - until the band started playing. There is a small college in this suburb and their marching band came out to play a few songs. Mom didn't see them set up right near the table and when they hit their first note, both she and London jumped. London kind of freaked out so he went back in his carrier until they were done playing. 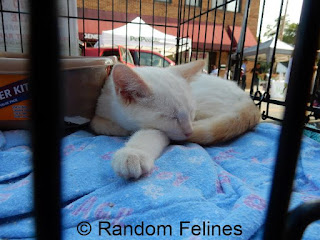 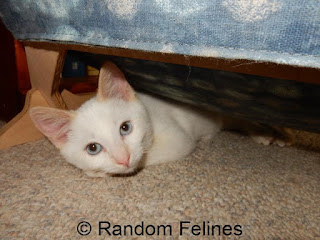 In other meezer news..... London has been ADOPTED!!!!!
Mom got an application for him via email on Saturday, checked everything out and he went home with his new mom and dad on Sunday. Just adults, no kids and they have an older labrador. When they met on Sunday, it was at a local coffee shop and mom had London on his harness. He got up on the table and walked right over to his new mom. She picked him up and he gave her the long sighing PURR....  No idea if they are keeping his name, but he didn't seem attached to it, so no big deal if they don't. They have all our information so hopefully we will get updates. 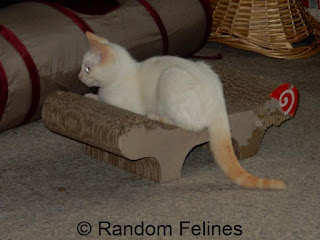 And check out the scratcher we got from Chewy.... Daiquiri decided the paper design had to be removed. So she pulled it all off and within an hour it looked like there was red snow all over the living room.