On Saturday, mom had to bring a big boy back from Petsmart to the adoption center due to him having a cold. While there, since Margarita had moved to Petsmart, mom offered to take another tiny family. There were several options, but the head of the rescue ended up sending this group home with mom: 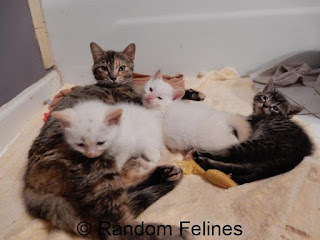 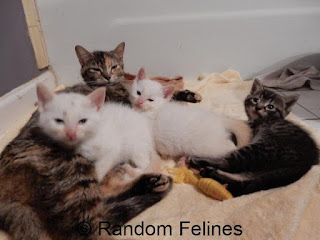 They were left in a carrier outside the rescue center. ugh.....

Anyhow, mom is a sweet torbie. And there are three boys.....one brown tabby and two flame point meezers. Their ears and tails have changed, though their noses aren't orange. The boy in the front of the picture and mom have a pretty nasty cold, so they are on meds. And no....there isn't anything else wrong with him. He has something stuck to his fur on his face and while mom has tried to clean him up some but it may need some soap and mom doesn't want to stress him out too much.

Introducing: Morocco (the mom), Cairo (the brown tabby) and London and Rome (the orange boys). The #citykittens

Morocco is super sweet and asks for attention. Though she is pretty defiant about not taking the meds. So far mom is winning, but it may end up being a draw. Cairo and the other meezer (mom is threatening to put letters in their ears cause she can't tell them apart at the moment) seem to be healthy...but that may not last. The snotty meezer is pretty stuffed up but hopefully that will clear up quickly with meds on board. He is eating, so mom isn't too worried about him.

Mom put the gate back up in front of the bathroom door to act as an airlock. However, upon smelling canned food, the fiesta kittens charged the gate and mom opened the door to a pair of orange tabbys. Now mom has to grab them every time she leaves. It is every kitten for themselves around here.
Posted by Random Felines at 5:30 AM