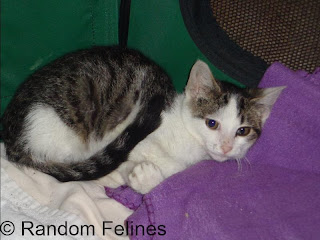 Yep, that is Hobbes when he first got to our house.

Then he moved to the Petco store and was living with Impala (who had originally been fostered by Miss Beckie). And then they both caught the infamous snot from Oliver....but with everyone here and the holidays, Impala went back to Miss Beckie's house and Hobbes went to our friend Miss Karen. Both kittens were feeling better and went to another Petco store. That is a MUCH smaller store and the kittens were allowed out of their cage to run around the store and burn off some energy.

Well, a man came into the store and filled out an application for Impala. And when he came into the store on Saturday to finalize, she was out running around with Hobbes and they were found snuggled up together. The man didn't want to separate them, so he decided to adopt them both!!

He lives alone with his kids part time (2 teenagers) and no other animals. We bet these two keep him laughing.