Something different and interesting....

A while ago, our friends at Glogirly did a review of a interview they had with a pet psychic.  We left a comment that mom often wonder what some of us were thinking.

Well then out of the blue we got an email from Sunny saying she had seen our comment and asking if we would be interested in a reading and review it here. We were going to talk to Nancy from Psychic Source.  Mom mainly worries about the three youngest ones here and how they get along with each other, so she sent a picture of Ivy, Spud and Junior.

Last Friday night mom settled into her chair with these two: 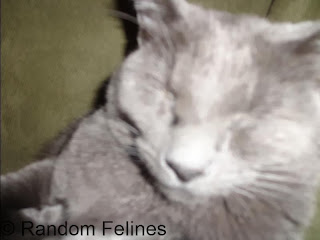 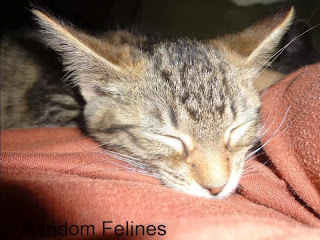 And then she dialed in to talk to Nancy. We will let mom take it from here:
I will be honest - I wasn't sure what to think going in. Like many others, I am kind of skeptical about this sort of thing. Now, I do believe there are things going on out there that I don't understand, but someone "reading" my cats from far away based on a picture? Not so sure about that. But I was curious and willing to give it a shot. I was most curious about the youngest three as their dynamic is the one that makes me the most crazy. None of them seem to get along and there are days I am sure Spud and Junior are going to start a death match.

As I started speaking to Nancy, she asked about Ivy first. It was interesting as Ivy was sleeping across the room on the floor vent (no, my house is not that cold but whatever). Nancy said that Ivy is very self confident (check), very calm (most of the time) and very comfortable. At this point I burst out laughing cause I am not sure Nancy meant literally comfortable, but as she said it, Ivy had rolled over onto her back and was heating up her other side on the vent. Nancy went on to say that Ivy views herself as the queen of the household and gets annoyed with the younger boys when they don't treat her with the respect she believes she deserves. But she said that Ivy is peaceful and content and knows she is living with us for a reason. I found that interesting since of all the cats, especially the foster-failures, she is the one that I can never give people a good reason for adopting. She needed to come back.

We then went on to talk about Junior. Now, if you have been following us for a while, you know that Junior was live-trapped at just over 3 months old as a kitten and came to us from a feral colony. I am fairly certain based on kittens we caught the following summer that one of the girls we trapped then was his mom as well. However, Nancy wouldn't have known that based on the picture. She said that he is afraid of people due to being kicked as a kitten by a young boy. Which is interesting....I am not certain anyone could have gotten that close to these kittens, though a couple of the memorial day kittens were pretty friendly once we caught them. Nancy also said that Junior is a big kid and that is part of the issue with Spud. Junior thinks he should be number one and is struggling a little to find his place. She did say that given some more time (maybe a couple of years), he will learn to trust me and our relationship will blossom. OK, I have waited this long, I am willing to give it more time. I told her this is his home no matter what.

And then on to Spud....Nancy said it felt like he was healing from something. I told her that he hadn't been injured or had surgery or anything. But then I told her about how I decided to keep him and have felt guilty that I was trying to replace Tigg (that is a whole other story). She said it could be emotional healing but that he is balanced and centered and looking for peaceful coexistence.

Nancy went on to say that Spud and Junior may never be best friends but as Junior settles into his place, they will learn to get along.﻿ 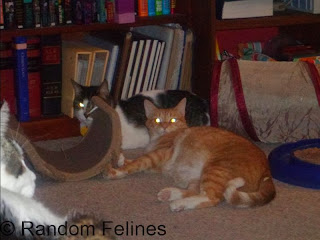 At this point, Junior came walking out from behind my chair and went over to lay down (seen above) next to Tommy. I would have sworn he was in the back bedroom as I knew that Spud was under the end table behind my chair. Junior had been in the room the entire time.  :)  I have to say that it is definitely the dynamic between him and Spud since Junior is visibly relaxed with the older cats - and will seek affection from them as well (Tommy had been grooming Junior's head just prior to the picture). 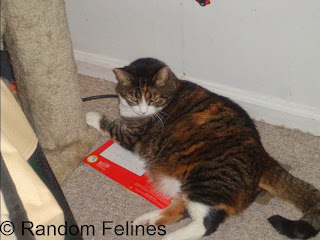 Ivy on her floor vent - warming her buns

At this point she asked if I had any questions and we went through the rest of the crew. She didn't have pictures, so I described them and gave her their ages.

Maestro: peaceful (he was sleeping on the arm of the chair next to me - his favorite spot). He sees himself as the center of my world.

Mozart: Nancy saw him as "religious" and an "emporer" (we may not want to discuss that part in front of him). She said that he is relatively undisturbed by the other adults in the house as he sees their mysteries and understands them.

Tim and Tom: she said they are very bonded and peaceful and happy.

I did ask if there was any sense that they were unhappy about the foster kittens that are constantly coming and going in the house. I have often wondered. They seem ok with it but....  Nancy said that they really are fine with the kittens. They see themselves as mentors and playmates and helping me help the kittens.

Then she said she had a couple of things about me. She said that I love what I do with the cats and the rescue and that I was meant to be doing this work. And here is the scary part: she said that in 2014 she sees a yellow male cat coming into my life that is meant to stay here.  YIKES!!!  :)

Overall, I was impressed. Sure, the cynic in me could say that she used a lot of generalities and could have learned some of the things if she read the blog before the call. But....I don't often discuss the "bad" dynamic in the house, so someone would have to do some digging to find all that. As for the other part of me, it was interesting to get the perspective of someone who has never met the cats and yet got a similar impression of them that I do. It was reassuring to know that they seem ok with the constant changes and are really ok with each other for the most part. And that maybe, just maybe, there is an end in sight for the conflict with the younger part of the crew. It was a very interesting phone call and I enjoyed talking to Nancy. 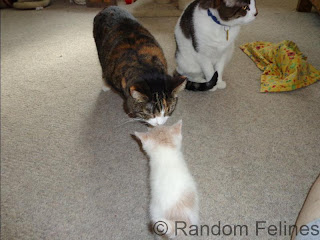 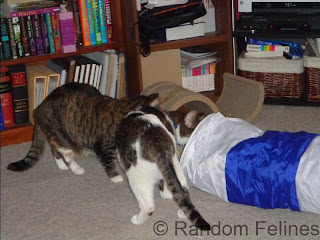 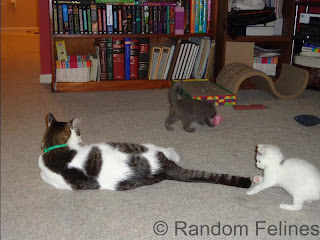 *We didn't pay for the interview but all opinions are our own.
Posted by Random Felines at 3:00 AM