Mom has been doing the logic problem of who would be here over Christmas and how to deal with that and the pet sitter.....


Well, some of that was solved over the weekend.  And it is all good!! 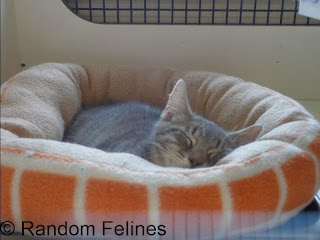 First Basil was adopted and went home on Saturday. Mom picked him and Amelia up from Petco on Friday after work as their snot had returned. Miss Beckie called mom on Saturday and said a woman had come up to the adoption center as someone at Petco had said he was up there (not sure why they would have said that, but whatever). The woman wanted to meet Basil, so mom drove him over. It was love and he went home with her that same day. He will be on meds for his snot while he adjusts to being in a new home. He will have a new mom and a big 4 year old cowcat brother named Apollo. In fact, his new mom posted an update on our facebook page - Basil is now Loki and did great at his first vet appointment.  :) 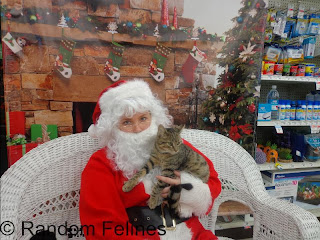 Maverick told Santa last week that he wanted a family for Christmas and his wish came true on Sunday. He is going home with a nice man and his girlfriend. Mav will be their only kitty. 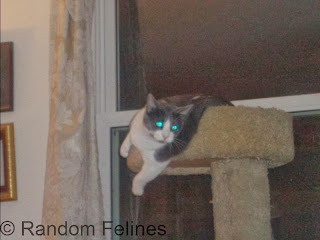 Milano is now up at Petco. She was kind of grumpy with Mav (she moved
up there before he left) so we won't be putting anyone else up there with her
unless Chex gets over his snot sometime soon. 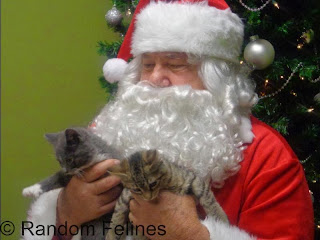 Rosemary and Saffron got to meet Santa on Sunday.
They are (currently) scheduled to be spayed on today.
(but the post goes up before they get there)
Cross your fingers - mom said if one of them sneezes on
a vet tech, she may have to scream.  MOL 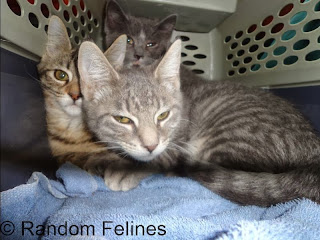 Rosie, Saff and Basil on Saturday

So the pet sitter will have the permanent crew plus 4 kittens. Though mom said something about maybe taking Rosemary and Saffron up to the store over the weekend to see if we could get any takers.
Posted by Random Felines at 3:00 AM