Sorcha and Screech are now at Petco. They went Wednesday after being spayed/neutered. Normally they would come home, but there is space at the store. And honestly, they will get less activity and get into less trouble up there. Plus the public can see them..... Mom did have to laugh when she picked them up - the tech asked if there was just the one carrier. Mom nodded and the tech said to keep on eye on them since they had decided they didn't like each other. Sorcha was a little growly, but she was probably just ouchy as she was fine once they got to the store. Screech was just stoned.... 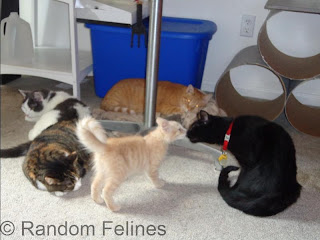 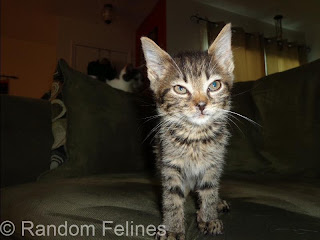 So now it is Licorice in the bathroom and the two smaller kittens in the playpen in the living room. We knew the littler ones were siblings and Sorcha and Screech were older single kittens. For those who don't remember, Screech came with his name and mom picked Irish names that start with S for the girls.

Well, the darker tabby has a mild case of the snot and mom has been giving meds, wiping noses and picking boogers (geez - don't you want to run right out and volunteer to foster now?). So, Wednesday night, mom made an amazing discovery.


The darker tabby.....previously known as Siobhan.....is actually a boy!!
(mom is so fired) 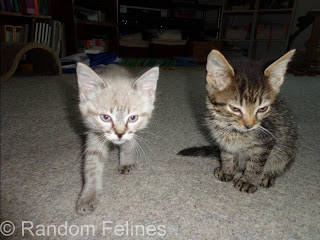 
Mom kinds worries about him - he is little and snotty. And yet yesterday morning once he got out of the playpen, he was bouncing around in circles chasing his own tail. Just gotta find a food he REALLY likes to put some weight on him (OK - and his sister).﻿ 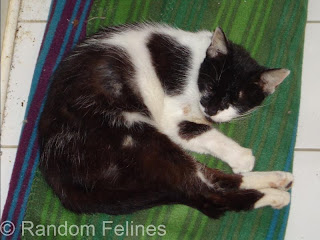 Mom was trying to get a better picture of Licorice. This is her favorite position - those back legs just don't curl up. Mom mentioned her bald spots yesterday. Mom took this picture on Wednesday night.... and discovered there are more spots than she realized. We thank you for the comments from yesterday. Mom is going to try to get some coconut oil and try that first. Certainly can't hurt her any.....  Licorice is due for the second run of Frontline on Monday for her lice problem. Mom hasn't seen any, but in this case WAY better safe than sorry. :)  We also have some pet wipes. Mom is going to try those over the weekend and we will see what happens.
Posted by Random Felines at 6:00 AM