We got to thinking about what we were gonna talk about today...... and then we were all - DUH!! Look around...we are up to our eyeballs in kittens!!!

Blog the Change asks us all four times per year to think about what is going on around us and how to affect change. Today we are going to tell you about two campaigns that we think are making a difference.

﻿Just One Day was set up to ask shelters across the country for ONE DAY to stop euthanasia and pick up cameras to promote their animals instead. Last year was a huge success and many shelters that we read about on their facebook page that promoted the Just One Day pledge had LINES of people ready and willing to adopt. There were several stories of shelters and rescues that had EMPTY cages by the end of the day. That is a true difference.....  This year it is June 11, 2013. You can go here to read more about the pledge, how to help them promote it and to check your state.  The rescue we support Colony Cats has taken the pledge!!

﻿The other thing we want to talk about is a new campaign by Petfinder called I am a Cat Parent.
There all sorts of fun things on the page - an article about cat dads (including Jackson Galaxy), videos about stereotypes, tattoo galleries, articles on just about every thing cat..... 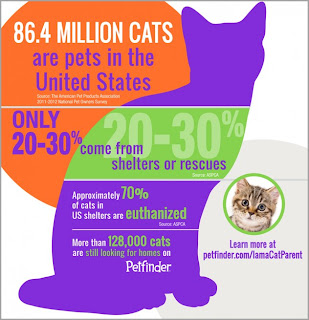 Obviously, our mom IS a cat parent and proud of it!! We think that more people need to realize that shelter and rescue animals aren't broken....they didn't ask to be in shelters....and it doesn't mean they are bad. It means that life happened and this animal - for whatever reason - needs a new home.