We are purring for everyone in Boston.....so scary to think that some sick person(s) used a wonderful event and celebration in Boston to cause such destruction and fear and loss.
~~~~~~~~~~~~~~~

Well, mom packed up the kittens and took them to Petco on Sunday. As mom was setting up, the carrier was sitting on the table and Cookie chirped at the kittens (mom put her in the playpen later and she didn't care a thing about the kittens, so don't feel too bad). 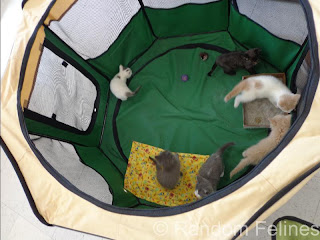 The kittens has a good time and played quite a bit at first. We had some interest and of COURSE everyone wanted to hold the babies. Mom won't let kids - she will hold a kitten and let the kids pet them. At one point there was an entire soccer team of girls in the store. YIKES!!  But the kittens were good. OK - except for that cocker spaniel. The dog was VERY well behaved and the owners kept him on a short leash, but Cheeto wasn't too sure about that hairy creature. 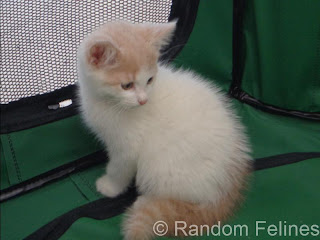 And then it quieted down and everyone piled up for a nap. First it was Triscuit and Samoa piled up on Milano. 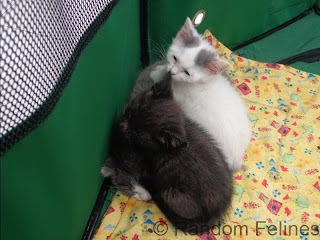 Then the whole crowd joined in. 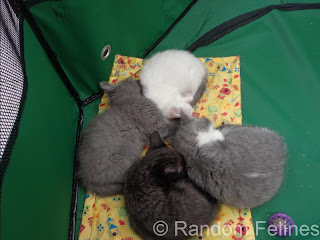 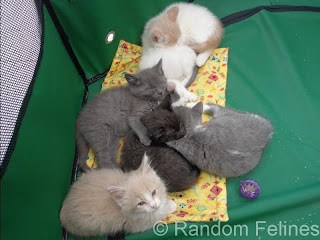 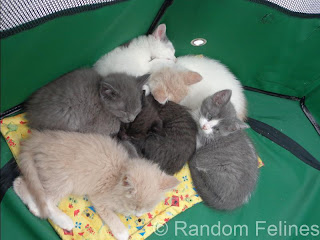 Finally home where they got lunch and another nap. A woman took an application for Cheeto. She knows that he won't be ready for at least a couple of weeks, but she was interested enough to take some pictures, video and an application. So, we shall see.....

Mom hasn't let them have freedom all the time yet - just don't trust those baby brains. But mom came home last night and was greeted by Cheeto. She doesn't think they were out very long though - and only Cheeto, Dorito and Chex made it out. She said something about figuring out how to attach the baby jail gate to the wall so that somecat (cough*tim*cough) stops knocking the gate away from the wall.
Posted by Random Felines at 7:00 AM