Eileen mentioned on Monday that she bets Emma likes Nurdle cause he is her size. Actually, for being about 3 weeks YOUNGER, Nurdle is actually BIGGER than Emma..... 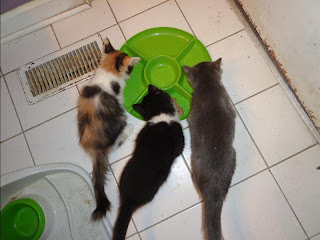 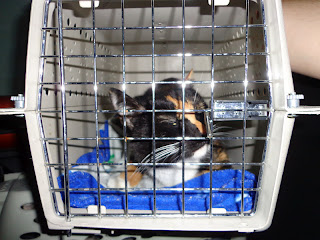 Remember Eclipse from this summer????﻿ Well, she didn't like it at the shelter much - she would growl and hiss at the other cats and try to slap volunteers (she is front declawed). Well......

On facebook on Tuesday, mom discovered that Eclipse was ADOPTED on Monday!!! Concats to her and her new family....we are glad they saw past her scared attitude and decided to give her a chance. They commented on the picture and said she was very relaxed and sleeping already at the house. :)
~~~~~~~~~~

Thanks for all the comments about Tim and Tom on Tuesday.... (say that 10 times fast).  Mom says she isn't opposed to a full extraction, but doesn't want that to be the first option. Plus it sounds like everyone else out there is having the crazies, so mom says maybe the boys just lost their minds temporarily.  Hard to say.... at least we aren't telling. :)  Oh, and Tim seems to feel better some days than others, so yes, he was running around playing with the laser, but he is also still kinda hissy some times..... 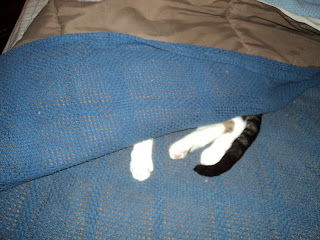 Mom talked to our v-e-t Dr T yesterday and she wants mom to get Tim in to see a pet dentist. Cause even if it is stomatitis, that doesn't explain his reluctance to open his mouth or some of the other things mom has been seeing. Tim goes Monday to meet Dr. Tom.....(no, even we couldn't make up something like that...Tim going to see Dr Tom...hahaha)
~~~~~~~~~~

Mom was hesitant to talk about this, but wants to throw it out there. A couple came in last weekend and said they were interested in Gin. Everything looked good until mom was going over Gin's medical records. Since the kitts were tiny when they were caught, their mom Allie was tested. It is policy of the rescue that if mom is tested and comes back negative, the kitts are not re-tested unless something arises that would make us think they have been exposed to something (mom is negative, kitts are negative - they get their antibodies from her). The lady freaked out....no way was she bringing a cat into her house that hadn't been tested. Mom tried to explain and she wasn't listening. Mom thought about trying to make another option for this couple, but decided that she wasn't going to cave to this woman.  We understand that people want to see "the test" on their cat - but this woman wouldn't listen to mom's explanation. (and her husband rolled his eyes at mom behind the lady's back, so we suspect she may just be like this)

Which leads us to this....we understand that not everyone does rescue. We understand that not everyone knows the ins and outs. But WHY do people have to act like they are doing us a favor by applying and adopting animals???  We heard more people complain about adoption fees and policies that we should. So, the next time you go to adopt, please understand that rescues are all different but they do things for a reason.....and the protection and happiness of the animal is their first priority (or at least it should be - some rescues are better than others).

And so, Gin is still waiting for her forever family. 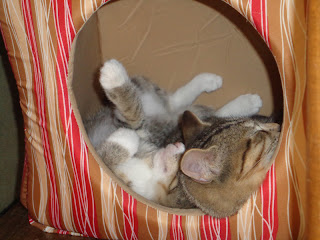