We know these new kitts are temporary, but some of us are NOT happy.....

Our local shelter needed a place to keep a couple of kittens since there was no surgery last week and they want kittens to stay healthy. Of course, the lady that called said she had a mom and kittens. Apparently she "forgot" to mention the kittens are about 5 months old. The boy cat came with his sisters, but he started a pee war here with Tommy, so he had to go back to the shelter (who knew that was mom's line in the sand - so to speak). The kittens are named after characters from The Big Bang Theory, but mom didn't get any names, so the tortie is being called Lula and the torbie Cupcake. They have been out with us for a couple of days. Both girls aren't sure what to think about Moonshine, but they have both developed an apparent crush on da Bourb..... who can blame them??? Mom caught Cupcake laying about 6 inches away from Bourb last night giving him the googlie eyes. Mom didn't get a picture, but it made her laugh. 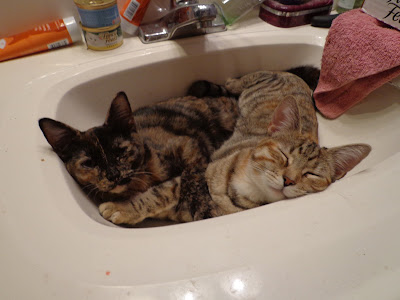 Then Uncle Bill from Petco got a little sick so mom brought him here too. sheesh.... Mom thinks he may be part Persian....he has a flatter face, a round body and short tail with a LOT of fuzz. :)  He is spending all of his time out with us (the girls above spend the nights in the bathroom with the gemstone kitts). He even climbed into bed with mom on Sunday night and slept right next to her - when Tommy growled at Bill, Bill just rolled over and yawned. That is one cool kitten.

And no, we don't suggest you try to do the math about how many of us there are right now, it will make your head hurt. :)

The auction for the gemstone kitts is in full swing and running through December 1. Click on the sidebar and go see what is available.

Mom is letting the kitts out with supervision. They have what she calls "baby brains" - they get so involved in playing that they forget important things. So yesterday morning mom let them out (mom was taking a baycation day) and after an hour or so walked back and called them....yes, they do follow her. They got into the bathroom - and 3 out of 4 kitts decided they had to pee - at the same time. MOL 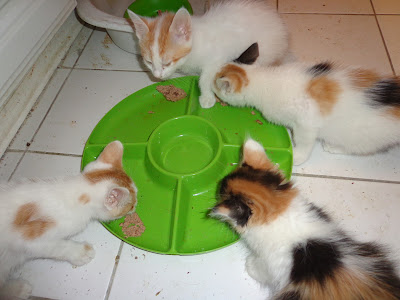