It has been a weird few days around here. We are gonna make this a two parter, so be sure to tune in tomorrow.  Oh, and you are going to have to deal with old pictures cause...umm...the flashy box is missing. Not that we know anything about that.

Anyhow, Mom went to visit our grandma in the hospital on Thursday at lunch. Grandma was doing better, but not as well as they would like. Grandpa was frustrated and it was a little tense.

Mom got back here Thursday night after stopping to see Grandma again, and the gem kittens weren't looking so hot. Though they did feel pretty warm. Not wanting to wait, mom packed them up and headed out to the 24 hour v-e-t hospital. She got there around 10pm and got home about 4am. Yikes. She left the kittens as their temps were all over 104 (normal is about 101). Not a good thing with tiny kitts. 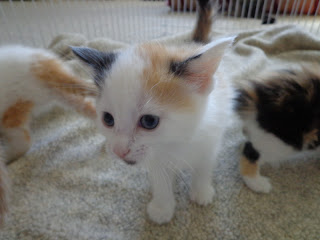 Grandpa called mom on Friday morning and said that grandma wasn't making any progress. She wasn't walking around like she was supposed to and she wasn't listening - like she was in outer space or something. So grandpa was making arrangements to see about a rehab facility for her for a few days. Mom said do it - grandma wasn't safe to come home and maybe having a third person be the "bad guy" was a good thing.

Friday afternoon mom picked up two kittens from another Petco store and took them to the one near us to see if they would get adopted a little faster. Gin was VERY unhappy about it.

The v-e-t called about the gem kittens and said they should stay overnight as they weren't bouncing back as fast as she would like and all still running temps.

So, by Friday evening, we had hissy kittens at Petco, Gin was ticked off, grandma wasn't recovering well, and the gem kittens were still at the vet.
Posted by Random Felines at 8:30 AM