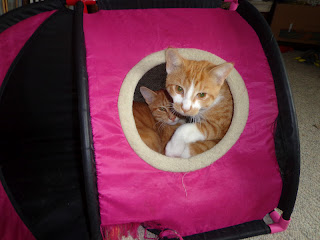 Mom got home last night and Duke (the orange boy) was acting funny. He was limping and didn't want to be touched. Mom sent a text to the cat caregiver at the shelter asking for advice. They decided to bring the boys in this morning. By this morning, Duke was weaving and just acting like he felt very bad. The vet comes in this afternoon to the shelter and hopefully we will know more then. Mom suspect calici but it could be any number of things.

Also, mom took new kittens to Petco on Friday. Grace is a calico and her brother Will is a black/gray/white tabby. They were found left in a carrier behind the adoption center. Grace was adopted (by a friend of the couple who adopted Whiskey) and went home on Sunday. Mom got a call yesterday from the store about Will. Mom stopped after work and he was drooling and had ulcers on his tongue - yep, that is definitely calici. Several calls later, mom ended up taking Will to the adoption center to get him started on drugs and keep him quarantined. Mom called Grace's new family and was told that she was acting lethargic Monday morning and they took her to their vet and her temp was 104. She is on antibiotics as well and mom said to make sure she is eating. Mom is going to follow up with them this morning.

Posted by Random Felines at 8:33 AM