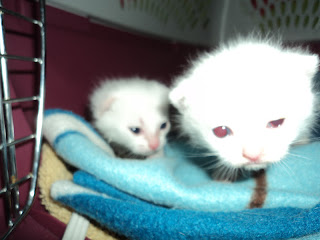 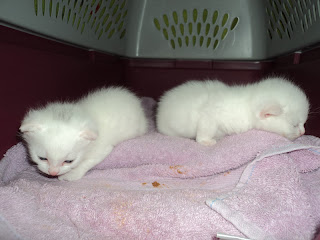 We have the sads.

Mom got home last night from work - running to get everyone fed and get changed and then pick up the kid to help at the shelter.

Only she looked into baby jail....

Annie had run for the Bridge.  And Wild Bill was dying.

She called Grandma to tell her she wouldn't be picking up the kid, sent a text to let them know she wasn't coming to the shelter and called the vet to say she was on her way. She held Bill the entire drive and whispered to him that it was OK to leave and be with his sister. He died at the vet's office.

The very nice Dr Mr Myers walked in after everything had happened and expressed his shock and offered to look at the kittens to see if he could find a cause of death. Annie had poly cystic kidney disease - there wasn't much that could have been done for her. Nothing conclusive on Bill. Though they did test for panleuk and it was negative.

As mom types this, Doc and Sally are wrestling in the cleaned up baby jail (mom is also doing laundry). They are twice the size and twice as active......maybe it just wasn't meant to be.

But Wild Bill and Annie Oakley were loved and safe and cared for.....and they had a name. Safe journey babies....there will be many there to meet you and keep you safe.

Email ThisBlogThis!Share to TwitterShare to FacebookShare to Pinterest
Labels: annie and wild bill, Doc and Sally, rainbow bridge, the sads