First from yesterday, Marg asked about Swizzle's kittens - Martini and Mojito were the only two that tested negative for FeLV. Martini was adopted last fall. Mojito was as well but about a month ago our friend Miss Beckie found a post on craigslist trying to rehome a kitten - which is a violation of their contract. So, Mojito was picked up and readopted about 2 weeks later.

Marble is at Petco. There was an open cage at another store, so mom moved a cat there and took Marble over to the adoption event and she stayed. Silver came back home with her since she isn't spayed yet. The non-technical scale they use for treats said she weighs about 1.75 pounds. :)  Hopefully she will make weight in the next week or so. Marble was pretty chatty most of the morning. 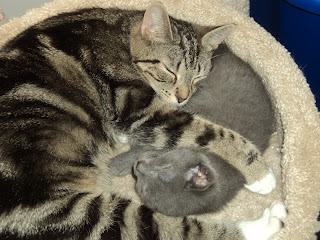 The ees aren't doing so great. Mom took them to the adoption center on Saturday and the rescue lady gave them fluids. Miss Beckie is a people nurse but she is home a little more and offered to take them back to make sure they get a little more medical attention. We aren't sure what is up with them, but we know every effort will be made to keep them healthy. 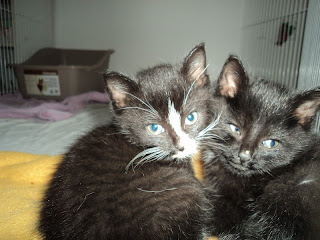 The condo came down - no reason to leave it up since Silver won't stay in there anyhow. MOL

Wendy and the kittens aren't as snotty, but they still have the runs. Mom is gonna email the shelter today and see what is going on.

Mom says there are a few things in the work this week, so we shall see what happens. :)
Posted by Random Felines at 8:25 PM

Email ThisBlogThis!Share to TwitterShare to FacebookShare to Pinterest
Labels: Marble, silver, the ees