Back in March 2006 (when mom was volunteering at that other place), a volunteer started their Bully Program to try to get more pitties adopted into good homes. The first two dogs were Diamond and Debo. Diamond ended up being adopted by Amanda (the leader of the group). Debo was at the shelter for a while and worked his way into everyone's hearts. He was more of an english bulldog looking pitt. And deaf as a brick. Mom said she was sure when she walked into the room where he was and there were 8 barking dogs - Deebs was asleep on his back, jowels flapping, snoring like an outboard. He didn't wake up until she had the door opened and touched his nose.

Like a lot of pitties, Deebs was a kid in a dog suit. His favorite thing in the world?? Mud puddles....mom swears he had more baths in his life than any other dog she has met.

He was adopted by a wonderful family who even tried to teach him sign language. They called him "fluffy" as a joke to his background.

Last fall, Debo was diagnosed with lymphoma. He did pretty well for a while. But, last weekend his mom and dad knew it was time and helped him cross the bridge.

We shall miss you sweet Deebs. You were a joy, a gentleman and such an ambassador for your breed. 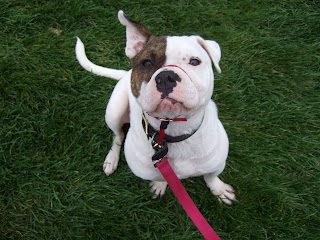 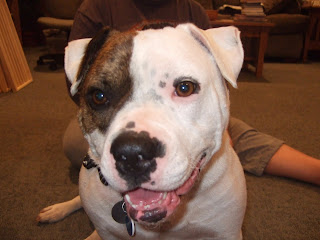