Maybe some of you have seen the ads on TV where people say they have had an "aha moment". Well, we are calling this mom's "duh moment".

But, let's back up.....she got home last night and went through the normal routine. Feed us (she calls us the yammering crowd - can you believe it??) and then check on the family in the bathroom. Swizzle had cleaned her dish and was calling for more. In the hopes of avoiding the a/d, mom opened another can of food (she has now sorted them to avoid the one Swizzle didn't eat before). Swizzle started to eat and mom played with the kittens.

Mom came out and got some dinner for herself and did some stuff around the house. She settled in to watch Mythbusters and decided to bring a couple of kittens out into the living room to get them to walk around. Walking for them is hard in the bathroom since they slide on the tile. Mom grabbed Mimosa and Mojito and noticed Swizzle had eaten everything again. hmmmmmm

Anyhow, the kittens walked around for a few minutes with mom sitting on the floor with them.

Side note: I was cracked up by poor Junior. The kittens stuck pretty close to me and he sat just outside the arc of my legs. He wanted to desparately to sniff the kittens and yet couldn't get up the courage to get that close to me. He whined a couple of times and leaned in, but finally just laid down and watched them closely. :)

Mom took the kittens back to the bathroom and discovered she had made a mistake.....she forgot to write down on the calendar to deworm Swizzle again (she got one dose from the vet that saw her before she had the kittens, but mom forgot to do it 2 weeks later). We won't give you the gory details on how mom realized her mistake, but suffice to say Swizzle got another dose of dewormer. Mom fed her again and it was gone this morning. She ate another 1/2 can while mom was showering so mom opened another can for her to have today.

Maybe we have turned the corner.....and mom is going to try the kittens on food in another week. She noticed tiny baby teeth in Martini this morning..... 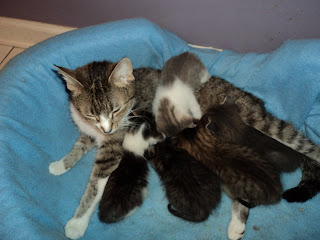 Dinner time - and yes, Miss Malibu is hanging upside down. 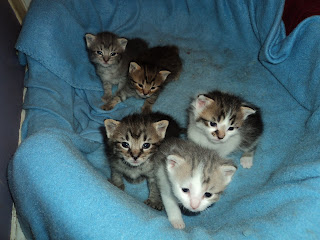