We want to take a moment from the things we normally do to support this. Most of us support an animal cause (or several - MOL). Today we are going to tell you about Foxy. She is a 4 yr old, 33 pound beagle mix. 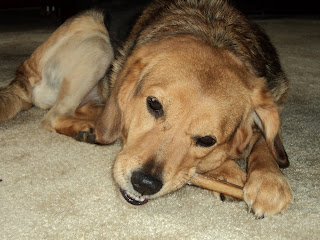 Foxy came into the shelter where mom used to volunteer as part of their Safe Haven program - which allows animals to come into the shelter so they are safe while their owners try to get out of domestic violence situations. Sometimes the owners can take them back, other times the animals are released to the shelter.

In this case, Foxy and her sister had been at the shelter for a year and the owner released them. Carmel went to Sheltie rescue and has since been adopted by a very nice retired couple. Foxy had some medical issues. The volunteers who walked her raised the money for her acl surgery. But the shelter deemed her unadoptable.  They did give the volunteers a chance to either adopt her or find her a private placement. They had until March 1.

You have all heard about our friend Kelly before. She went to Utah and Best Friends with mom and also helped us rescue Watson (sorry mom can't find the right post to link it here). Before they left in February, Kelly said no way was she going to let them kill this very sweet little dog. She got the email in Utah and agreed to take her.

Anyhow, trying to keep a long story a little shorter, mom tried to convince her parents to adopt Foxy. Grandpa said NO! However, a couple of weeks later mom asked if they would be willing to foster her for Kelly since she already has a dog that is a little wild and it was getting hard to deal with both of them. Grandma and Grandpa said yes so Kelly brought over Foxy and she has been with them for almost 2 weeks.

So, Foxy needs a home and mom gets to snicker at Foxy being spoiled rotten by her parents. Foxy has gotten to ride in the truck and she hangs in the yard with them. There is the option of them adopting her, but Kelly is still looking for a nice couple to adopt her. Just in case.....  MOL 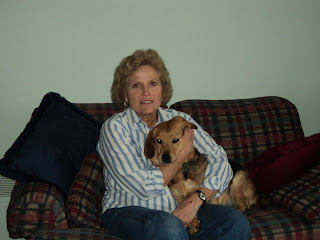