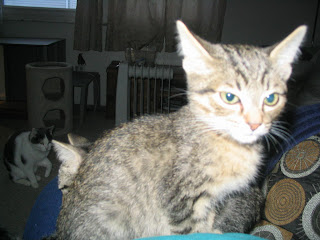 HOLLAND HAS BEEN ADOPTED!!!
He is the last of the chickens to be adopted. I went to check on him last night and his name band had been changed to read "adopted". Another foster family brought in their kittens (another group of brown tabbies) and he came out his shell with kittens his own size. And he was adopted with one of the girls from that group, so he has a new home and a new sister!!
Posted by Random Felines at 9:33 AM