I got home last night and he wasn't doing well.  I got in touch with the vet that helped me with Bug, and they fit me in.  Sultan was very cold and not responding much, but they wanted to try to get his temperature up before making any decisions.

The vet called about 7pm and said that he had perked up some and suggested I take him home and give him a chance.  He didn't eat at all over night and I was up at 6am this morning just holding him.  I left the other kittens in the bathroom and just sat with him in the dark living room and told him it was ok for him to go.  It was strange....all the adults took a spot around the living room and it was so quiet.  Sultan would cry once in a while, but I mostly sat there and listed to him breathe.

The vet office opened at 7:30am.  I called and they said come right over.  The tech got him on a hot blanket surrounded by water bottles and it still took 10 minutes before his temperature even registered on their thermometer.

Roads are terrible here this am as we got an ice storm but the vet made it in and we talked about the options.  I had called the rescue last night and she said she trusted my judgment.  I just felt like it was time to let him go...I didn't want to keep fighting when it felt like the wrong thing to do.  Dr. Hoffman agreed and said she suspects it may just be something congenital and no matter how hard we fight, the end result may be the same.

So this morning at 8:30am, I let Sultan cross the Bridge.  I know I did the right thing, but it still breaks my heart.

The tech said as I was leaving that she hopes I don't stop doing the good work I am doing.  I won't, even when it gets hard.  I haven't gone into work yet, and as I sit here at home typing this, Phoenix is sitting between my wrists purring so loudly.... So no matter the heartbreak, there are still lives to be saved.  So I keep it up - in the memory of those that died in shelter with no names, those that are abused but saved by rescues, for those rescues that operate on a shoestring but never give up....and for the small purring fuzzy kitten that still needs my love no matter how bad I feel right now. 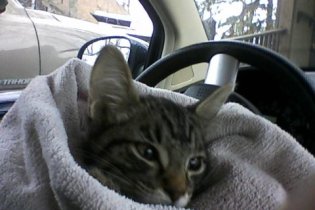 Posted by Random Felines at 9:42 AM